(The following document was prepared By Chi-Ming Tseng 曾啟明 for booth tending volunteers. This exhibition has won outstanding award again)

Peace is an ever-changing thing, and is all relative. Here we are not trying to say Taiwanese is in peace of not in peace, or trying to teach people how to achieve peace. Just try to present a glimpse of Taiwanese past, present and future in terms of conflict and peace process. It is people who live in peace and suffer from lack of peace. So the emphasis is on people: we have a photo mosaic of Taiwanese people, people’s (elementary school student’s) drawing on peace, and a graffiti wall for people to express their thoughts on peace. 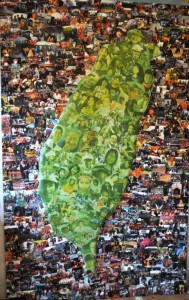 In the center of back wall, the photo mosaic is constructed from hundreds of photo prints and made into the shape of Taiwan. On the land part, there are representative faces of Taiwanese people from different races, religions, and professions (artists, athletes, policemen, soldiers, farmers, fishermen, workers etc.) And outside the land part, are pictures contributed from people in local Taiwanese community, their friends, relatives, in daily life, on trip, at work, at important event, and on streets. 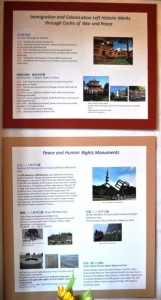 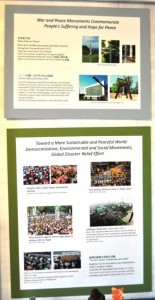 At back wall next the photo mosaic, we have four posters related to peace:
(1) Immigration and Colonization Left Historic Marks through Cycles of War and Peace
(2) War and Peace Monuments Commemorate People’s Suffering and Hope for Peace
(3) Peace and Human Rights Monuments
(4) Toward a More Sustainable and Peaceful World: Democratization, Environmental and Social Movements, and Global Disaster Relief Effort
In (1), we have as examples: Fort San Domingo at Tamshui淡水紅毛城 and Fort Provintia – Chihkan Tower普羅民遮城 – 臺南赤崁樓.
In (2), we have as examples: Peace Poles in Taiwan世界和平柱 and Kinmen Memorial Peace Park八二三炮戰 – 金門和平紀念園區
In (3), we have as examples: National 228 Monument in Taipei台北二二八和平公園和平紀念碑, Hualien 228 Peace Memorial Park花蓮二二八和平公園, Chiayi 228 Peace Park嘉義二二八和平公園, and Green Island Human Rights Memorial Park 綠島人權文化園區.
In (4), we have as examples: 2012 Taiwan presidential election, 2013 Anti-Nuclear Demonstration, 2013 Demonstration against human right abuse in military, 2014 Sunflower Movement, and Tzu Chi Foundation global relief effort慈濟功德會全球救災活動.

On the top of left and right wall, two long graphic strips serve as tribute to the Sunflower Movement started by college students in Taiwan recently. The movement is having a significant impact on shaping up Taiwanese future. On the right, there are rows of blooming sunflowers under the sun. On the left, there are rows of hands in the air. The sunflowers symbolize people’s power shining through black-box political dealing. The hands in air symbolize people’s aspiration to freedom, democracy, justice, love, equality, and stewardship. These are all important ingredients to peace. Social movements generally elevate society to a better state and bring a more sustainable peace.

On the top of back wall, there are two short graphic strips. Shown on the left are 6 flags representing some political and economic forces that had significant influence on Taiwanese recent history. From 1st row, left to right and to the 2nd row, in chronicle order:
(1)The Portuguese who gave the name of Formosa to Taiwan,
(2) Dutch East India Company荷蘭東印度公司 who established the first colonial government on Taiwan (1624-1662) until defeated by Koxinga國姓爺鄭成功,
(3) Qing Dynasty Chinese government清朝,
(4) The short-lived Republic of Formosa臺灣民主國 (1895) (the yellow-tiger flag藍底黃虎旗),
(5) Japanese colonial government who ruled Taiwan for 50 years till the end of WWII (flag shown belonging to Japanese Imperial Army),
and (6) Republic of China.
Shown on the right are 6 flags representing some social movements currently going on in Taiwan: Environmentalism/Global Citizen, Indigenous people awareness/rights, Gay & Lesbian rights, Peace, Students Sunflower movement, Anti-nuclear Power movement.

On the left wall and overhead, we have a hundred drawings of “Peace among the People” from students in Groveland Park Elementary School in St. Paul, and Kuangfu Elementary School in Hualien, Taiwan花蓮光復國小. Sub-subjects of works from Hualien students include peace bell on 228, fireworks at Taipei 101, Hot-air Balloon Festival at Hualien, Colour Run event, sky lantern for peace, rapids rafting, dragon boat race, harvest festival and other festivities. Several colouring techniques were uses including crayon, water colour, markers, wax dyeing.

Also hanging overhead, we have some origami doves, and paper, wooden decorative pieces of characters “peace” 平安. Some pieces have shape of apple, for apple in Mandarin sounds the same as “peace” 蘋=平. 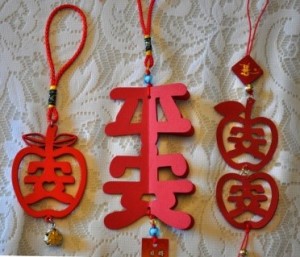 On the right wall, we have a museum-grade graffiti wall painted by Susan Liu on canvas. We have 12-color markers for visitors to draw or write their peace wishes. After the exhibit, the graffiti wall will end up in a museum somewhere in US. So encourage people to participate in the history-in-making activity. 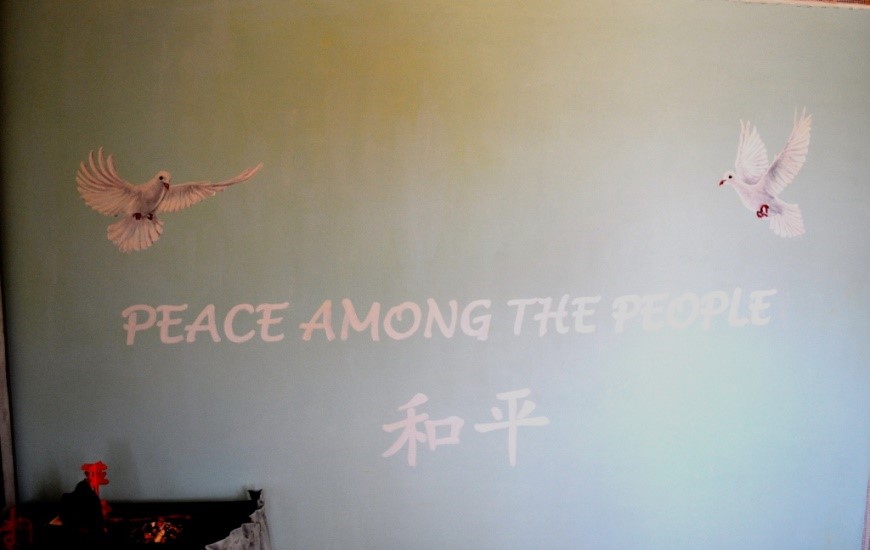 At inner corners of the booth, we have two stands. Behind the skirt, there is storage space for costumes, bottle water and your personal belongings.

On one of the stand, we have a Sword Lion “Guardian of Peace” ceramic mascot劍獅、和平守護神, which originated from Port Anping 安平of Tainan where navy ships stationed in ancient times – Koxinga, and Qing Dynasty. During night time, officers and soldiers would hang their weaponry on the wall with swords inserting into the lion-headed shields. The lion-headed shields served to guard against thieves and robbers and protect the residents. Later on it became a custom for the people in the area to hang up mascot like this at their doors to ward off evil spirits and bring peace. Coincidently, the port’s name Anping in Mandarin and Taiwanese also means “Safety and Peace”. 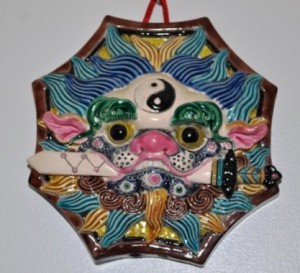 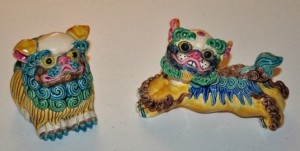 On the stand, we also have a pair of ceramic mini-lions. Lions are believed to bring peace and good fortune. These lions and sword lion are made of Cochin ceramics交趾陶. Cochin Ceramics (also known as Cochin pottery, Koji ware, Koji pottery, etc.) refers to clay figures painted with colorful glaze then fired at low temperature to produce decorative items for Taiwan temples and private mansions. The subject matter of Cochin ceramics are mostly stories of traditional belief, folklores and auspicious symbolic artifact. Taiwan (especially Chiayi, Tainan) has become the kingdom of this unique art.

On the stand, we also have a wood sculpture of Dharma, the Zen (Chan) Master達摩禪師 (Taiwanese: Tatmo, Japanese: Daruma). Zen meditation is believed to bring inner peace.

This year we have a new stamp for visitor’s passport. The stamp is designed by Herbert Chiou, comprising of images of Taipei 101 (509m, 1671ft, tallest building on Asian Pacific, and 4th tallest in the world), and Yushan (Jade Mountain, 3952m, 12966ft, tallest in Taiwan). 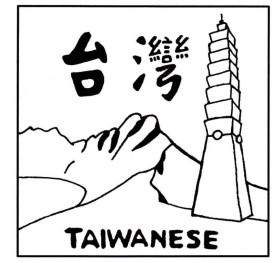 Special Notes:
• Please wear traditional costume. If you don’t have your own costume, we have a few in the storage for you to change. Do not wear jean.
• No cell phone talking, eating or drinking inside the booth. You can have a bottle of water, but hide it in storage when it is not being used.
• Handing out any advertisement material is strictly prohibited by the festival.

The following photos also include the Bazaar and Café booths. 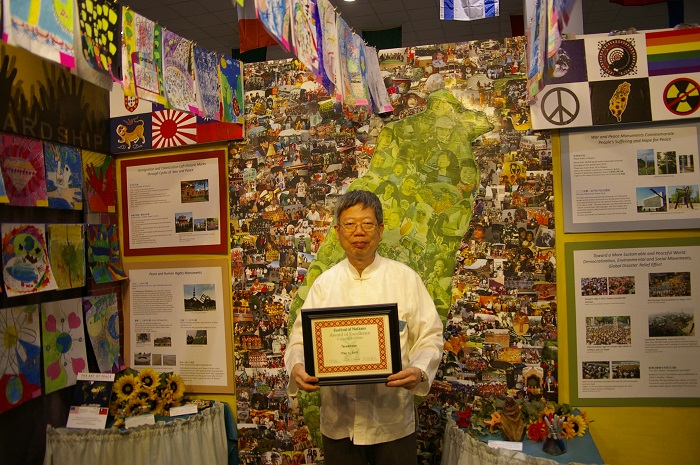 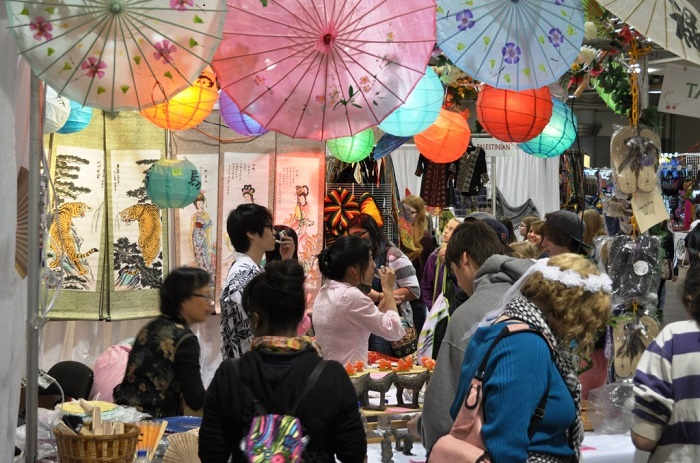 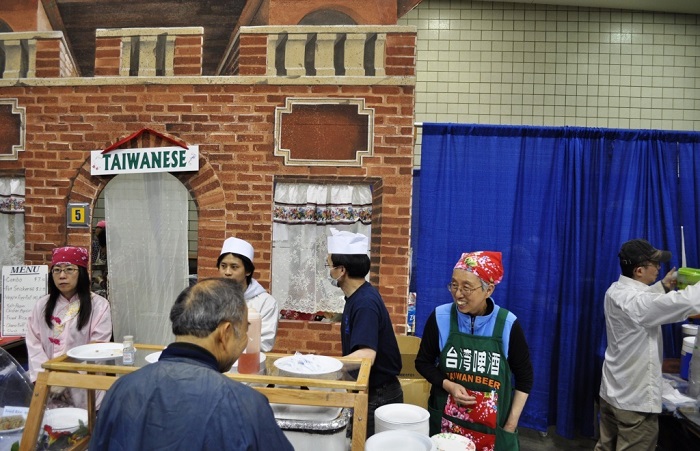 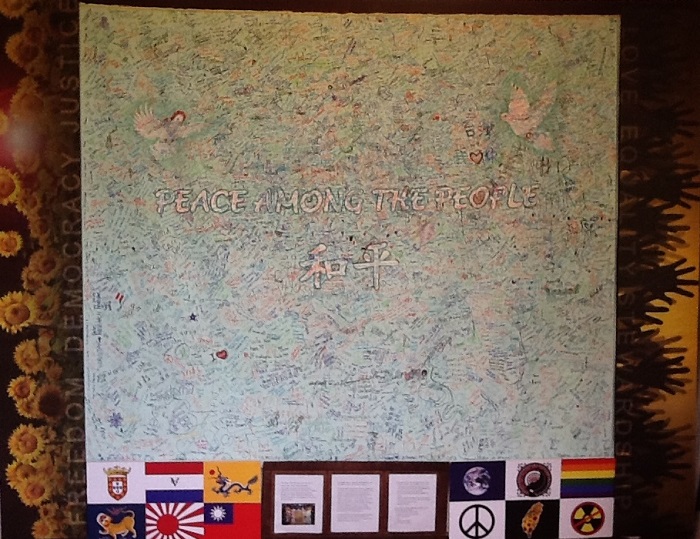 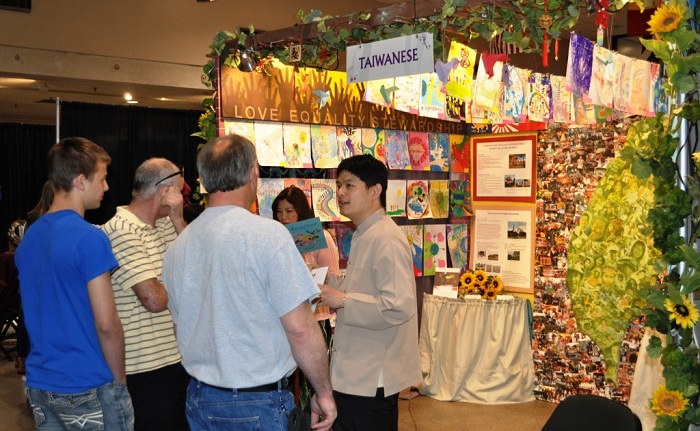 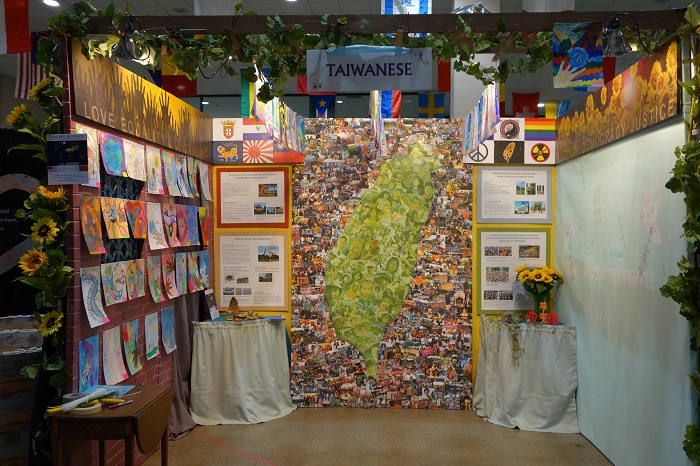 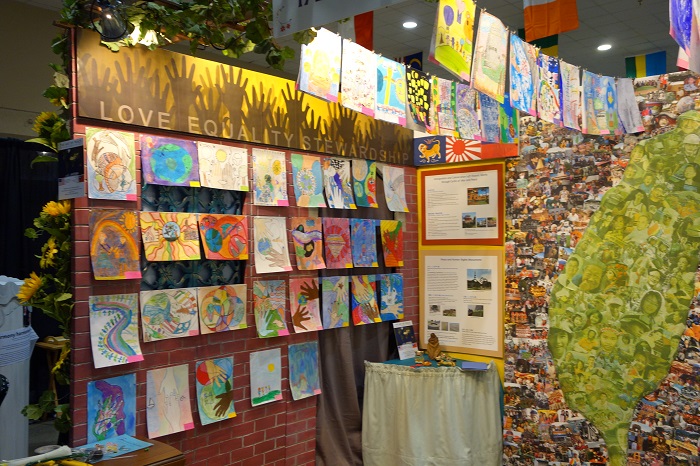 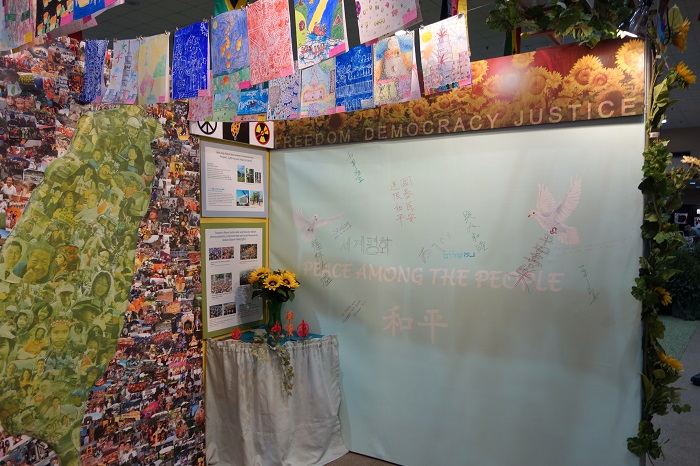 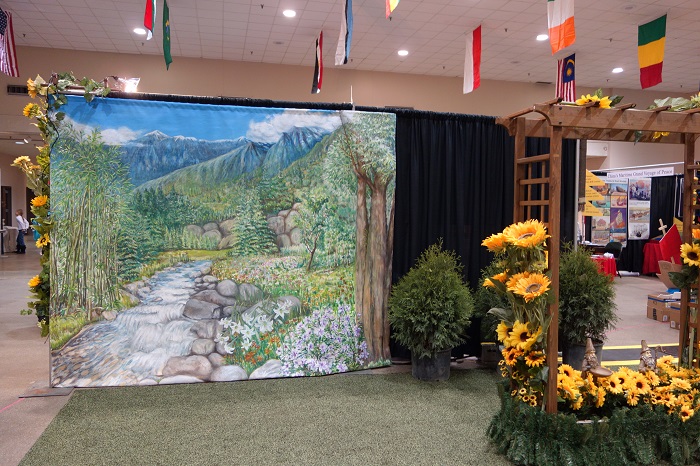