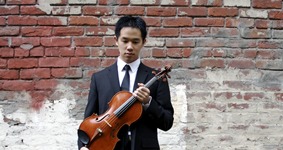 Violist Danny Sheu, a native of San Jose, was born and raised in a musical family, and began his musical studies on the violin at the age of five before switching to viola at eleven. His musical endeavors have taken him through concert halls across the United States such as Royce Hall and Walt Disney Concert Hall as well as on tours and festivals through Europe and Asia.

A highly sought after musician, he has appeared with many of the Bay Area’s symphonies, including Stockton, Santa Rosa, Monterey, Modesto, Silicon Valley, and Santa Cruz, and has also appeared as a soloist with the San Francisco Korean Symphony. As a dedicated chamber musician, he is one of the principal players for One Found Sound, a conductorless chamber orchestra based in San Francisco, and is a four time winner of the Lillian Fuchs Chamber Music Competition in New York. As an educator, Mr. Sheu is frequently involved as a coach for California Youth Symphony, San Jose Youth Symphony, UC Santa Cruz, and Leland High School, and maintains a private studio of students in San Jose.

Dann Sheu holds degrees from UCLA and Manhattan School of Music, where he was on scholarship. He was also a fellow of the inaugural year of San Francisco Academy orchestra. His primary instructors were Paul Coletti, Richard O’Neill, Lawrence Dutton, Robert Rinehart, and Jonath Vinocour.