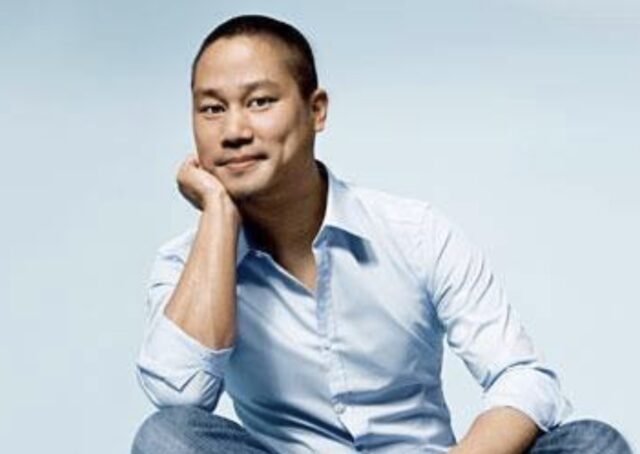 Tony Hsieh, the former head of Zappos who catapulted the shoe company into the big leagues with a sale to Amazon and then used the proceeds of his success in a huge project kickstarting regeneration of a run-down part of Las Vegas, Nevada, with tech and wider business investments, has died at the age of 46.

The cause was injuries he sustained from a house fire, a spokesperson for Hsieh confirmed to TechCrunch. He was with his brother in Connecticut at the time of the fire. It’s not clear if anyone else was injured.

The ultimate cause of Hsieh’s death is still under investigation. We will update this as and if we learn more. The full statement from DTP Companies, which ran the Downtown Project (Hsieh’s mammoth initiative to regenerate the very run-down, older part of Las Vegas) is below.

The news has sent shock waves in the midst of the Thanksgiving holiday weekend, and through a community in a city — heavily dependent on tourism — that has been hit extraordinarily hard by the Covid-19 global health pandemic.

Hsieh was a brilliant, offbeat, and — to many people, often very directly — kind-hearted person who was regularly described as a visionary.

That was not an overstatement. Growing up in the Bay Area, he sold his first company — a marketing tech firm called LinkExchange — to Microsoft when he was just 24, in 1998.

Using some of the proceeds from that, he formed a venture capital firm called Venture Frog. One of his early investments there was ShoeSite.com, founded in 1999 by Nick Swinmurn at a time when the latter could see a shift happening in how people were shopping for footwear, doing a lot more of it online.

Hsieh was entrepreneurial in his investing instincts and subsequently took a more hands-on role in the startup, which eventually rebranded to Zappos. As Zappos’ CEO, Hsieh moved the company from the Bay Area to the outskirts of Vegas in 2004 to build out a bigger customer service operation, run under a particularly strong ethos of flat management aimed at empowering and inspiring employees. His leadership helped catapult it to huge growth: by 2009 he had sold Zappos to Amazon for around $1.2 billion (a truly giant sum for an e-commerce startup at the time).

He then continued to run the company, and used the proceeds of that work to focus on his next big project: urban regeneration.

Las Vegas is a city that leaves little to sentimentality. Situated in the middle of the desert, the city’s relentless focus has long been on growth, breaking new, seemingly limitless, ground to do so. For years, that meant huge swathes of “older” Vegas enterprises, in the Downtown region, simply sat empty, leading to the larger area eventually becoming a hotbed of crime and poverty. As with many other urban centers, it has been a vicious cycle: people focus on building newer homes and businesses elsewhere, and that makes the older areas even more neglected and vulnerable.

Hsieh saw the charm of Downtown, full of 20th-century modernist flourishes underneath its more obvious signs of decline, and proceeded to buy up huge chunks of the area: apartment buildings, houses, small business structures, old casinos and hotels, and empty lots.

His vision was not just to be a real estate magnate — although that is clearly something that interested him, too — but to regenerate Vegas in the mold of what he knew best: tech.

He proceeded to invest in a huge run of startups, provided they move to Vegas to build their businesses Downtown, to bring entrepreneurs and jobs to the area.

There were lots of quirky elements to the effort: it was not all about hard-nosed business, and some of it was just about trying to have fun on a grand scale. Inspired by Burning Man, for example, Hsieh paid to have several of the structures built for the festival in the desert to be transported and installed permanently in the Downtown area.

A couple of memorable evenings I spent with him in Vegas really underscored to me his profile in the city.

Hopping from casino to bar to restaurant, one night we ended up in an excellent piano karaoke dive where his best friend from childhood and I sang Duran Duran duets and he knocked back Frenet Brancas. People flocked around him wherever he went (so many breathless “Hi, Tony”‘s from many women we walked past). I remember wondering if this was what being a mafia boss (with friend playing the role of a consigliere, or me a guest for the night) was like back in the day.

Of course, the Downtown Project, as it came to be called, was a grand vision, and like many grand visions, it has had its ups and downs.

Some of that is unsurprising: Simply willing something to exist isn’t always enough, and the strike rate for success in tech is, in reality, very low. And the offbeat approach didn’t always play in the best way, and sometimes obscured what might actually be going on. Case in point: Hsieh abruptly stepped down as CEO of Zappos earlier this year, with no explanation provided for the move, after being in the role for 21 years.

Still, between Zappos and what Hsieh built in the city, his work and bigger ideas were and are an important testament to the impact that the tech industry can have with a little imagination and a lot of hard work and persistence.

Our condolences go out to his family and his many friends, and also those in the slice of the tech and business world he helped to create.

The following is quoted from James R. Hagerty’s article in the Wall Street Journal on Nov. 29, 2020

“Tony Hsieh, who led online shoe retailer Zappos.com Inc. for two decades, had some surprising guidance for employees: If customers wanted a shoe Zappos couldn’t supply, the representative should direct them to a rival that could.

That service, he figured, was a good way to cultivate loyal customers.”

“As a young entrepreneur, Mr. Hsieh changed the face of internet retailing with bold strokes. To overcome customer skittishness about ordering shoes without trying them on first, Zappos offered free shipping and free returns, giving customers as long as a year to send back unwanted products. Customers could order dozens of pairs of shoes and keep only those they liked—a policy that set a high bar for rivals.”

The Harvard-educated CEO, whose parents were immigrants from Taiwan, also insisted on keeping his call center in the U.S. rather than outsourcing it to an overseas supplier that might not meet his exacting standards. Instead of being compensated for handling a high number of calls quickly, Zappos employees were encouraged to spend hours on the line with a single customer if that was what it took to reach satisfaction.”