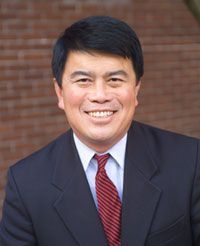 David Wu (吳振偉 Wu Chen-wei) was born in Hsinchu, Taiwan in 1955. His family moved to Latham, New York in 1961, where they were the only Asian Americans. In 1977, Wu graduated from Stanford with a bachelor’s degree in biology and sought to continue his studies at Harvard Medical School. Instead of completing his studies at Harvard, however, Wu transferred to Yale Law School where he earned his J.D. in 1982. After graduating, Wu first clerked for a federal judge before joining Miller Nash law firm in 1984. In 1988, he co-founded the law firm Cohen & Wu, which represented companies in Oregon’s high-tech development sector.

In 1998, Wu ran for and was elected to the U.S. House of Representatives, making him the first Taiwanese American to ever be elected to Congress. He held his seat representing Oregon’s 1st Congressional district until his resignation in 2011. He was a member of the New Democrat Coalition and the Executive Board for the Congressional Asian Pacific American Caucus, for which he served as Chair from 2001 to 2004. He served on the Committee on Education and Labor, as well as the Committee on Science, Space, and Technology. Wu funded virus research for an AIDS treatment and other scientific initiatives, supported NASA’s space program, and was well known for taking a strong stance on human rights, even if it risked his seat in Congress. One of his most successful projects was to create Lewis and Clark National Historic Park and expand the Fort Clatsop National Memorial.