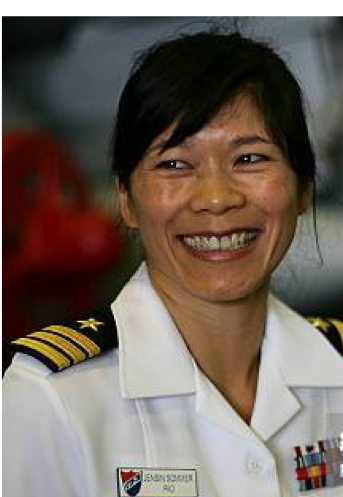 Jensin Wong Sommer (翁正欣 Weng Cheng-hsin) was born in 1969 in Shuilin township, in Yunlin county Taiwan. At age 7, she immigrated with her family to Baltimore to join her parents, who were already in the US working for the US Navy. In high school, she applied and was accepted to the US Naval Academy. It was her dream college and the only school she applied to. At the time, only 1 out of 10 Naval Academy students were women. During her time at the Academy, Sommer majored in Economics and minored in Chinese. In May of 1991, she was among the 900 graduates from a class that originally started with 1,400 students. She was the second Taiwanese-born woman to ever graduate from the Academy.

One of a very small number of Taiwanese Americans to serve in the US Navy, she retired in 2016 with the rank of Colonel after 22 years of service. During her 22 years in the Navy, she worked various jobs as an Intelligence Liason, Public Affairs Officer, Media Relations Officer, Speechwriter, and Deputy Director in locations around the US and abroad in Japan. Over her career she also studied Japanese Language and Literature at the Defense Language Institute and received her master’s in International Relations and Affairs at the Catholic University of America. Her naval career gave her the ability to travel the world, performing for the first family, and personally meeting Jimmy Carter, and the Taiwanese ambassador to Japan. In 2001, she was selected to be a spokeswoman for the US Pacific Command.

Sommer has stated that she is proud of her Taiwanese heritage and that part of her heart and mind will forever “be left in Taiwan.” She hopes that in the future she can help strengthen Taiwan-US relations. Her husband, John Sommer is also a former US Naval Officer, and both of her children are also graduates of the US Naval Academy. In 2019, T.A. Archives selected her as an Outstanding Taiwanese American.