Masa and Gloria Chen with Their Large Yellow Cattleyas 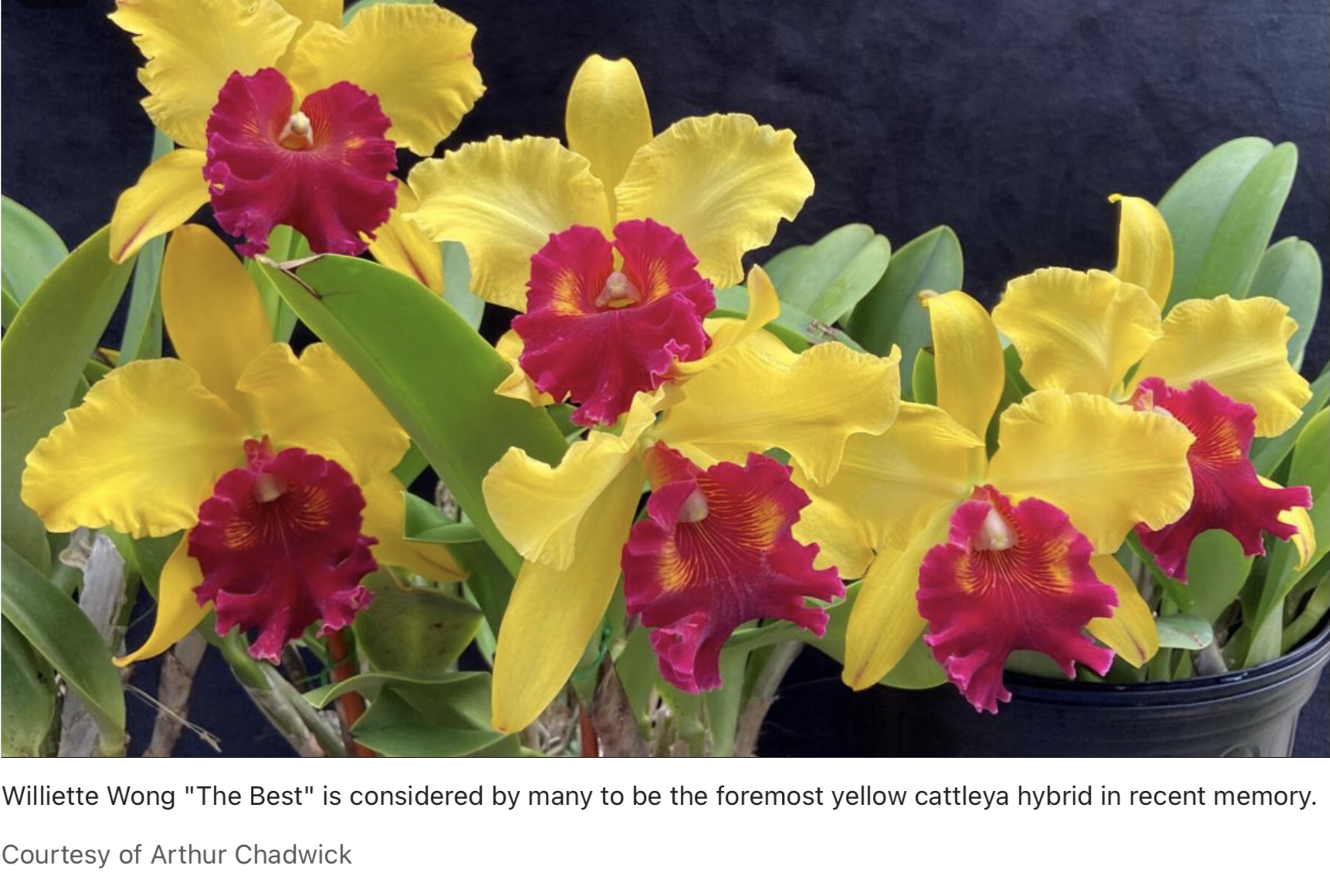 Hybridizers have been trying fervently since 1901, when the very first attempt at combining two lemon-hued species took place. Since then, there have been hundreds or even thousands of pairings – mostly with disastrous results.

The first problem, as breeders soon discovered, is that the color yellow in cattleyas is hopelessly recessive and is nearly always lost when another color is introduced. For example, a yellow flower crossed with a white flower does not yield any yellows. In fact, it yields purple.

The second problem is that there are only a handful of yellow cattleya species in existence and these few have flowers that are either poorly shaped, very small or exhibit traits that are altogether unsavory. For example, the most well known yellow species, Cattleya dowiana, has petals that are narrow, fall forward and fold in a week.

So it is not surprising that, even after a century of breeding, there are limited highlights to report. – but countless misses and near hits.

What many consider to be the foremost yellow hybrid in recent memory started with a little pollen trading in the early 1980s.

Masa Chen and his wife, Gloria, had recently moved to Hawaii from Taiwan to escape martial law. He had been an agricultural researcher of bananas with a keen interest in orchids. Together, they transitioned from his orchid hobby to a business.

The first five or six years were challenging for the enterprising couple as they invested in land, shade houses, and stock plants. Their close friends, Eddie and Williette Wong, whom Masa had gotten to know from previous trips to Hawaii, lived nearby and assisted with the new venture.

“They helped find the property in Waianae and even gave us their registered company name, Orchids of Waianae”  Gloria Chen said. “I think it was their dream to be commercial but they never acted on it because they had full time regular jobs.”

When it came time to make the first hybrids, Masa and Eddie collaborated. They traded pollen and took turns setting seed pods using tooth picks and steady hands. One such combination proved to be a winner.

Yellow with red-lipped cattleya hybrids were popular in Hawaii at the time with several prominent breeders in the area and a number of fine stud plants in circulation. Blc Toshie Aoki (Faye Miyamoto x Waianae Flare) and Blc Tassie Barbero (Stewart Fortune x Faye Miyamoto) were both promising yellows and were created by the local orchid legend, Masotoshi Miyamoto.

As luck would have it, Masa had one plant and Eddie had the other. Masa contributed the pollen from Toshie Aoki and Eddie applied it to Tassie Barbero and they waited. It would take 6 months for the seed pod to ripen and another few years for the seeds to fully germinate in sterilized flasks.

It was decided that Masa would grow the seedlings of this new unnamed hybrid to maturity in one of his commercial shade houses – a process that, even under the ideal tropical conditions, would take five years. He raised 500 seedlings and patiently observed their flowers with the ultimate goal of selecting the best for cloning.

As the plants started to bloom, it became apparent that this was a special hybrid. All the seedlings had large yellow flowers with various shades of red lips and fantastic shape. They were an improvement on the parents which is the hope of every breeder.

Masa offered to name the new hybrid, Williette Wong, after the wife of their friend and breeding partner, Eddie who had helped so much in the early days of the orchid business.

Soon, however, rumors spread that there was a grower on the island with a shade house full of never-before-seen large yellow cattleyas. Collectors from the mainland started showing up, having travelled for hours, hoping to buy the plants. Masa looked the seedlings over and chose the one that had all the outstanding traits. He simply called it “The Best.”

The initial cloning of Blc Williette Wong “The Best” was 5,000 plantlets which were carefully potted in 1992. By the time they matured five years later, there was a long list of standing orders from the mainland. Masa avoided distributing the clones in Hawaii for fear that a big wholesale nursery would obtain a plant and mass produce it.

“The Best”  later won the coveted Award of Merit from the American Orchid Society. The complimentary description read, “Sepals and petals bright lemon yellow with slight red flaring at the tip.” Forevermore, the botanical name of the hybrid would now carry the accolade suffix, AM/AOS.

Twenty years have passed, and Masa has cloned his prized summer-blooming hybrid several more times. There are undoubtedly tens of thousands of Blc Williette Wong “The Best” AM/AOS in circulation today and specimens can regularly be found at flower shows, orchid events, and in private and public collections.

Masa and Gloria Chen are now approaching retirement age and are winding down their wholesale nursery, Orchids of Waianae. Gloria Chen looks back fondly on their nearly forty years of “fun with orchid lovers, collectors, hobby growers, and friends.” Orchids have a way of leaving legacies and the big yellow cattleya named for their friend, Williette, is theirs. 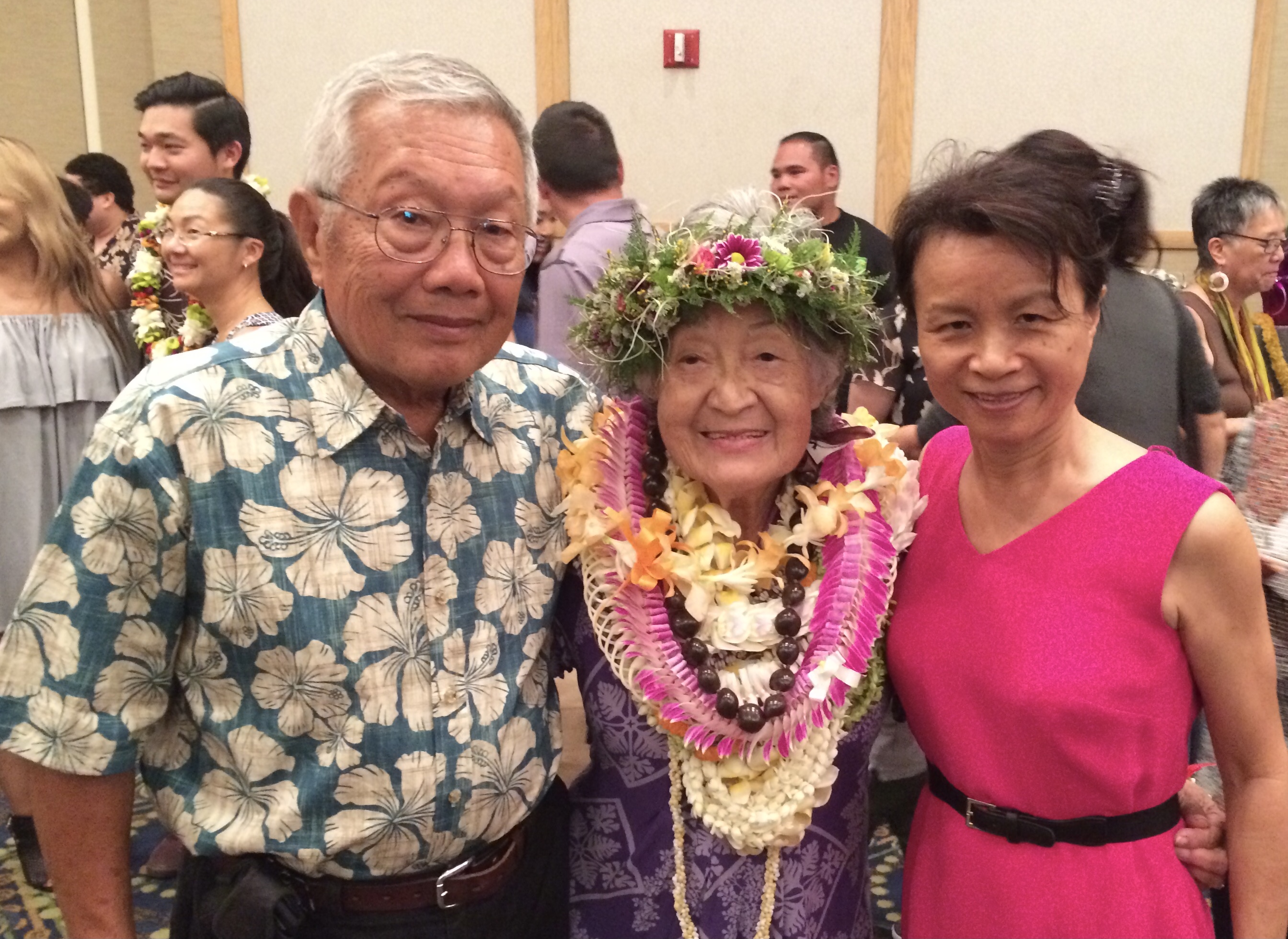 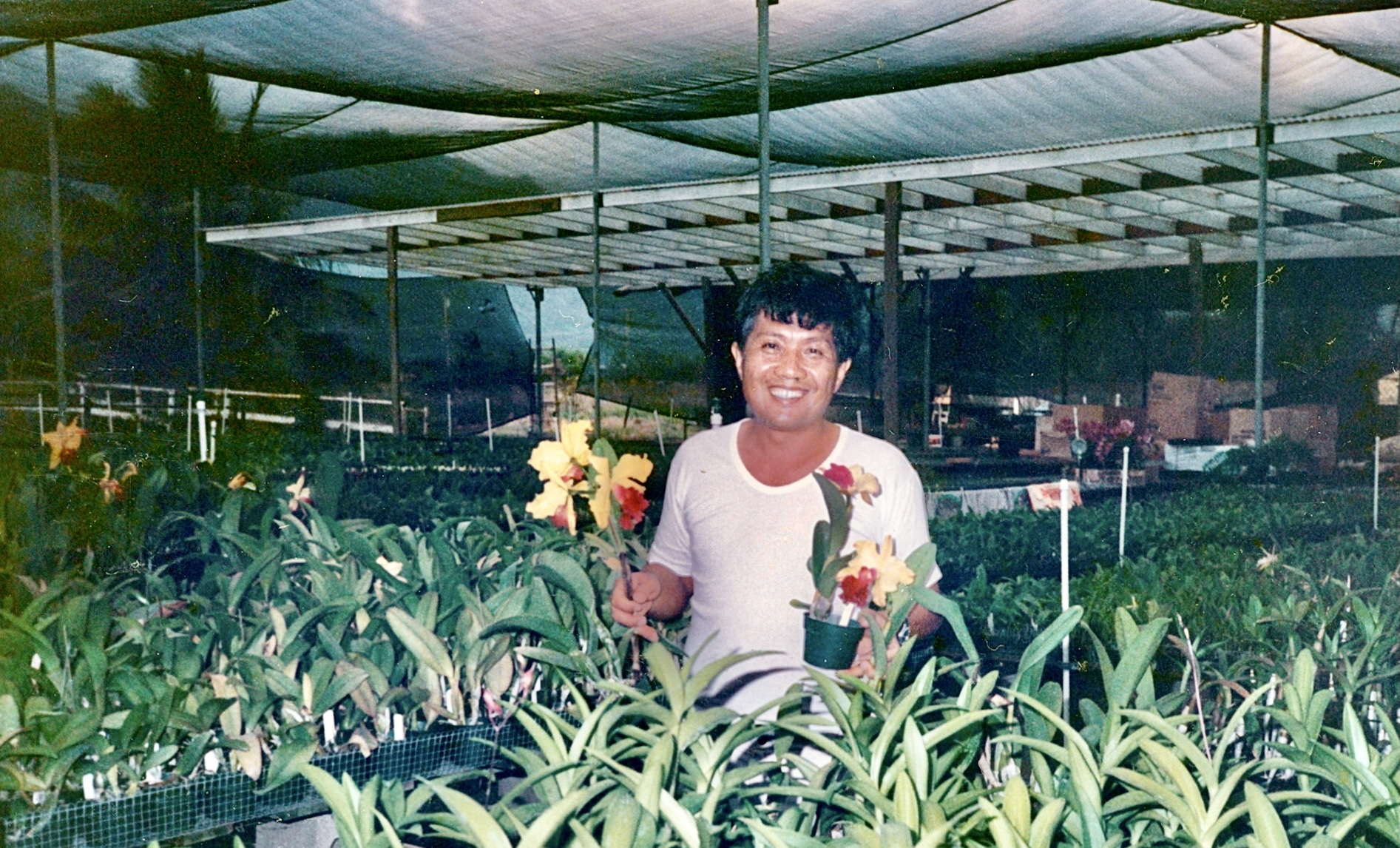