A few months after I was born in 1974, my family moved to Austin, Texas. At that time there were only a handful of Asian kids in our community, much less Taiwanese ones. My mom, Pearl (Pi-Chu) Wu (楊碧珠 ), really valued my brother and I being able to communicate with them so she made it a priority to teach us Taiwanese.  It was very hard work for her, especially because there were so few Taiwanese in Austin at the time and we were primarily only exposed to Taiwanese at home. And even though she would take us to Taiwan every other summer, many of our cousins didn’t speak Taiwanese either. My mom even had people ask why she didn’t send me to school to learn Mandarin.  However, because I could speak Taiwanese I was a lot closer to my grandparents than many of my cousins. I would even get bigger “hong baos” (紅包) when we visited.  My mom then tried to start a Taiwanese school in Austin, but couldn’t find a teacher at first. Fortunately it turned out the local Austin Taiwanese Presbyterian Church Pastor John Yeh(葉明翰) knew how to teach Taiwanese and he became our first teacher.

When I went to UC Berkeley in the fall of 1992, I heard there was an Taiwanese language class being taught so I went to check it out thinking I might take the class. As it turned out, the teacher was so surprised at my Taiwanese, especially for a second generation Taiwanese American, that instead of taking the class they suggested that I help teach it. At the time it was a very casual small class run through Taiwan Forum, the student Taiwanese Association .  I did a little research and asking around and found out we could turn the class into a De-Cal class, these were student taught classes that gave UC Berkeley school credit. We went through the steps in the application process, but our primary hurdle was finding a department chair to sponsor us. The East Asian Languages department was the obvious and natural fit to sponsor our class, but that chair was distinctly not very supportive. After sponsoring us for 1 semester, he kept making unfounded claims as to why we shouldn’t be a De-Cal class.  It turned out he had ties to China and was not comfortable with promoting the Taiwanese language. Undeterred and persistent, I approached several other departments looking for sponsorship and making our case as to why we deserved to be a De-Cal course. Finally I had found the Asian Studies department chair supportive and willing to sponsor us. After word got out about the Taiwanese classes, we grew from 1 small casual class to 5 full classes with 3 levels by the time I graduated. It was truly amazing how much interest there was, we even had waiting lists. Both students and us teachers received UC Berkeley school credit, making things feel more legitimate and satisfying.  Of course we also had fun time in the class.  I remember once at the end of the semester our Taiwanese class performed a “matchmaking (相親)” skit in Taiwanese.  It caused a sensation on campus.

So who took these Taiwanese classes? Interestingly the students taking the classes were there for a broad range the reasons. Yes there were the second generation Taiwanese Americans wanting to connect with our heritage (such as myself), there were also recent immigrants from Taiwan who had never had to opportunity to learn the language since it was banned from schools when they were growing up in Taiwan. Several of my students had done business in Taiwan and wanted to learn Taiwanese to communicate better because most Taiwanese business owners spoke only in Taiwanese at that time. Another few were married to Taiwanese people and others were just interested in the language. Some of the graduate students from Taiwan thought the class would be an easy A from them, but many of them were slackers and were disappointed that it was more work than expected. There were even a couple of students that we had to initially fail, but they were later able to make up for it through extra credit.

We had no budget for the class for books and supplies so we needed to go out and fundraise.  I went with the other teachers to the NATWA (North American Taiwanese Women Association) annual meeting and spoke in Taiwanese on behalf of our class, asking for financial support for class supplies. The fact that I, a second generation Taiwanese American, spoke in Taiwanese caused a big sensation in the crowd and thanks to NATWA’s then President Mrs.Fu( 林郁子) and the support of the community we achieved our fundraising goals quickly.

This experience in helping organize and foster the Taiwanese language class at UC Berkeley soon helped me in ways I hadn’t imagined.  I majored in Economics at UC Berkeley, but then decided to go into public accounting in my junior year. I had joined an accounting fraternity, Beta Alpha Psi, which was made up of other students with the same focus.  Almost everyone else was a UC Berkeley Haas Business School undergrad major in Accounting except for me. The most coveted job at the time for an accounting major was to land a position at one of the Big 6 accounting firms.  When they came to recruit on campus, I obtained summer internships at 2 of the Big 6 accounting firms, and then later I had full-time offers from 5 of the firms, more than anyone else my year. My grades weren’t the highest and I didn’t have the breath of accounting courses that most of my peers had. When I asked why I was chosen, several of them stated my experience of fostering the growth of the UC Berkeley Taiwanese class.  They were fascinated by the story and said it had shown invaluable initiative.

After I graduated the Taiwanese language class continued to thrive.  There came another point where they needed to fundraise so again they went to the annual NATWA meeting.  I had heard they didn’t raise as many funds that year, and when asked what the difference was, it turned out they didn’t make their plea in Taiwanese, only in English.Who knows if that what made the difference.

A linguist once said that Taiwanese was a beautiful language with its 7 tones naturally creating a sing song effect, just as we have 7 notes on the music scale.  Many of the classic Taiwanese children’s folk songs such as Tinn Oh Oh(天黑黑) and Hwe Chia(火車) are just the natural melody that come from just reciting the words.  I’m now teaching those songs to my kids and and my parents  are so happy to sing along with them. I hope to pass along a little bit of this beautiful language.

We are the coordinators and teachers of the University of California at Berkeley’s Taiwanese Language Classes. These classes have been in existence for 6 semesters through the volunteer efforts and dedication of Cal students who care about promoting the Taiwanese culture and language to others.

Founded, organized, and (aught completely by student volunteers, the Taiwanese language classes have grown from a small no-credit l2-person class to the size of three classes with over 90 total students in attendance. Now each class is a 2 unit Berkeley university De-Cal class with the support of the Asian Studies department. We each willingly put forth our time and efforts with no regrets and with the success of the classes being our only reward. Seeing Taiwanese American students being able to speak and understand their parents belter is a successful enough of a reason for us to continue the class. In order to run three language classes though, there are many costs involved. Until recently, we have been personally funding these expenses. Yet, with the expansion of these classes, costs have been increasingly difficult to cover. Expenses include copying of class materials, buying books in advance from Taiwan, parking fees for guest speakers, rental fees for video equipment and class activities, and flyers for publicity around the campus.

We have been approaching bay area Taiwanese organizations and have received positive responses from organizations such as the Northern California Formosan Federation (NCFF). Yet, we need the support from as many organizations as possible. We need not only financial support, but also moral support as the university will listen more carefully to our needs and our concerns if they know that national community organizations are supporting our cause.

Our fundraising goal per year is $ 1,000 dollars. So far, we have collected enough contributions from the community to reach have that goal. We humbly ask that the Taiwanese Women’s Federation help us out and contribute the $500 dollars needed to reach our goal. This money will be used solely for the purpose of the Taiwanese classes. Part of our future plans is to bring in community speakers for the class and lo be able to reward them with small donations.

Ideas such as these can only be achieved through the community’s involvement and contributions.

Furthermore, we understand that the National Women’s Conference is going to be held in San Francisco this year on Thursday, April I8lh. Since we live right across the Bay, if you would like a representative from the classes to come speak about it further, we would gladly attend. Also, if you want more information sent to you, we can gladly send you a class syllabus, descriptions, or history and editorials from some of our instructors and coordinators. Feel free to give our head coordinator, Chen-Chen Wu, a call with any further comments, suggestions, or questions at (510)-486-0607.

Thank you for your consideration of our solicitation for a worthy donation.

On behalf of the Berkeley Taiwanese Language Classes, 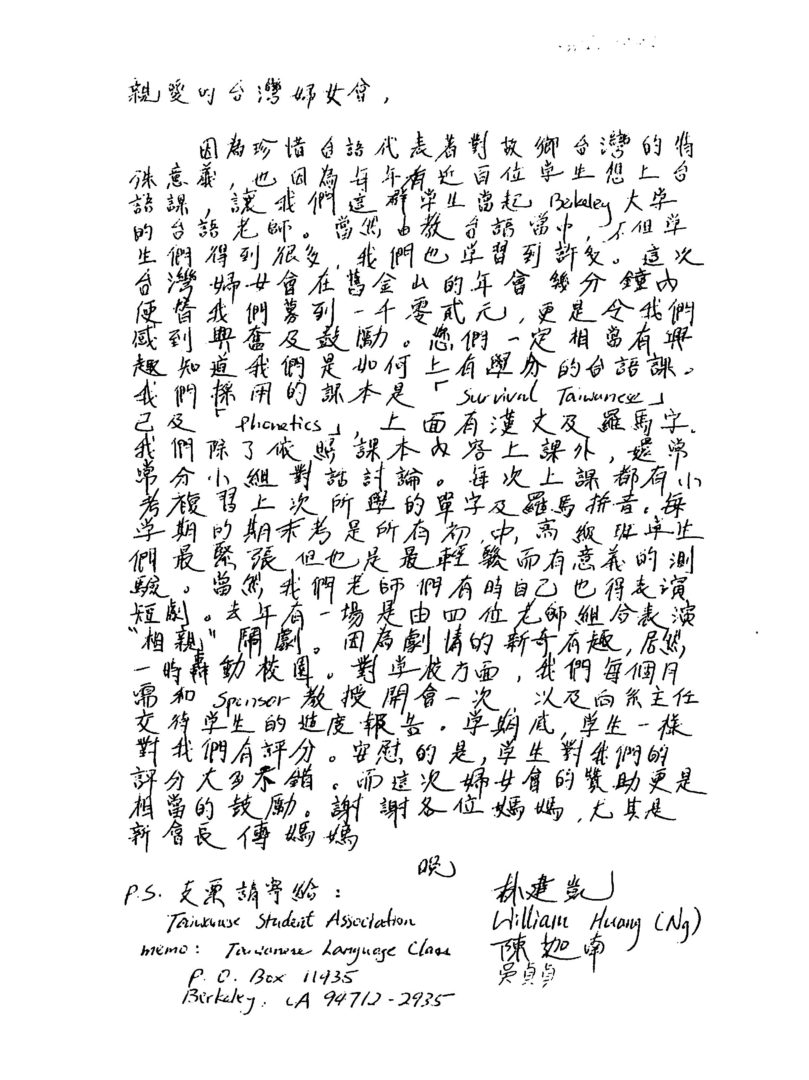