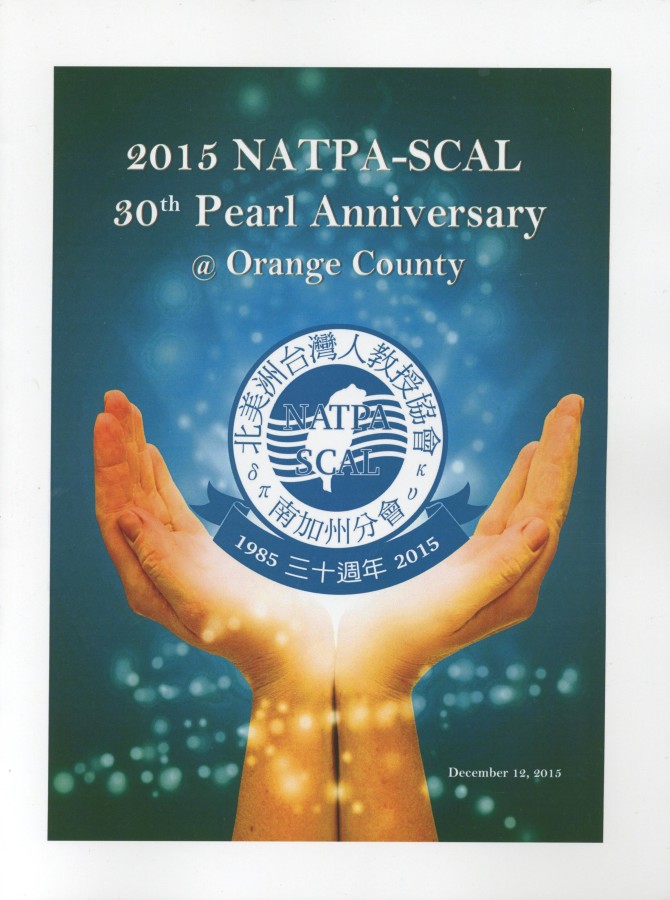 It is great honor and privilege for me to serve NATPA SCAL chapter president for the past 2 years. 承先啟後 is the reason I took this daunted responsibility. Prof. Dr. Shutsung Liao founded NATPA in Chicago on Feb. 16, 1980 for advocating Taiwan democracy as well as promoting science research and education in Taiwan and the United States. Consequently Prof. Ju-Shey Ho 何汝諧教授 established NATPA Southern California chapter in 1985.

For the past 2 years of my presidency we have had winter retreat in Desert Hot Spring in May 2014, spring fun walk at Solana Beach in 2014 and at Laguna Aliso Beach in 2015, special memorial service for NATPA founder Prof. Liao at the Geneva Presbyterian Church, Laguna Wood on Nov. 1, 2014. In May 2015 NATPA SCAL chapter members made the virgin visit to NATPA NCAL. We pledged two chapters will alternate visit each other yearly. In NATPA-SCAL Chapter Annual Conference Dec. 6-7, 2014, there were more than 60 participants to celebrate and share friendship together. It was greatly successful! Excellent lectures were presented by 郭清江博士，林本仁教授，Ms. Jorge Jong Ph.D，and Dr. Joe Yeh at Cal State University, San Marcos. Then participants enjoyed beautiful scenic tour in wine country Temecula and San Marcos lead by 蔡文玉教授.We had surprised visit by a NATPA old member 蔡丁貴教授 who has been a great leader for Taiwan independence.

After sponsored outstanding national NATPA Fullerton Annual Conference 2013, team of Southern California Chapter did again for sponsoring national NATPA Baja Mexico Annual Conference in August 2015. Kudos to our great Southern California team. At conference 8 young leaders from Taiwan and 12 post graduate Taiwanese students who have been studying in US joined us, members enjoyed great programs, especially had merry time together at Carnival Inspiration ocean liner. Everyone was profoundly touched by pro Taiwan spirit, dedication, and hard work in Taiwan by these “自然獨”young Taiwanese guests. 黄國昌教授 and 史明先生 were honored the recipients of 第一屆 Prof. Liao Shutsung Memorial Award at conference. The conference was complimented one of best NATPA annual conferences. All accomplishment was caused by diligent effort of our outstanding team work. This is the tradition and spirit of NATPA-SACL chapter.