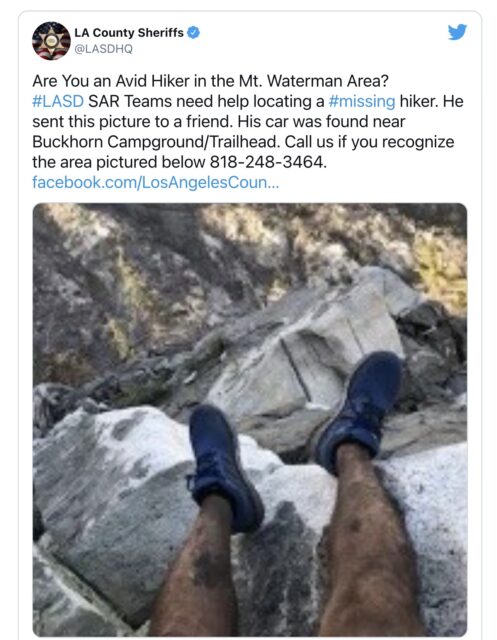 華盛頓郵報（Washington Post）4月22日以「迷路絕望的登山客，靠著陌生人不尋常的愛好救了他」（A hiker was lost and desperate. A stranger with an unusual hobby saved him）為標題，報導郭斐品科技助人的善舉。 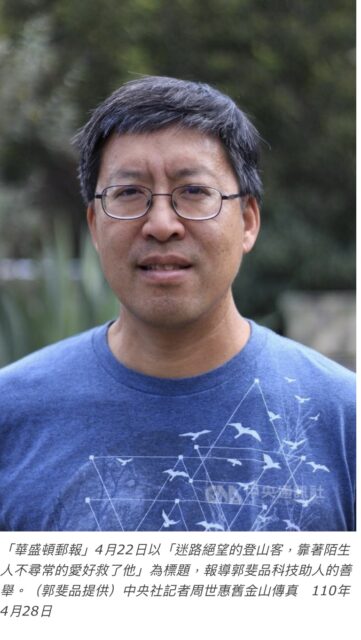 A hiker was lost and desperate. A stranger with an unusual hobby saved him.

When Rene Compean snapped a photo of his soot-stained legs hanging over a steep cascade of rocks, he feared it was the last picture he’d ever take. Hopelessly lost while hiking in Southern California, he thought he might die.

“I’m not ready,” the 45-year-old man told himself as he repeatedly yelled for help and used charred sticks to write SOS on any open surfaces he could find.

Compean had trekked through the Angeles National Forest trails more times than he could count, he said, but after venturing along a new path April 12 — for what he intended to be a two-hour outing — he lost his way.

Several hours into the solo hike, after many failed attempts at getting his bearings, he was scared. The temperature was dropping fast in the remote, rugged terrain, and the winds were whipping.

Compean grabbed his cellphone, which had less than 10 percent battery remaining, and climbed to a spot where he was able to get at least one bar of signal.

“SOS. My phone is going to die. I’m lost,” Compean texted a friend, along with two photos showing where he was — though only one went through. It was the picture of his legs.

The photo offered minimal information and, given Compean’s lack of cellphone signal, the resolution was very low. More importantly, though, Compean didn’t realize his location settings were disabled on his phone.

Still, the grainy image was somehow detailed enough for a total stranger to decipher the hiker’s exact location.

Ben Kuo was working at his home about 60 miles away in Ventura County, Calif., when he stumbled upon a tweet from the Los Angeles County Sheriff’s Department, along with the photo of Compean’s legs.

The sheriff’s search-and-rescue teams had already spent the previous night unsuccessfully looking for Compean, so they released the photograph to the public hoping someone could help.

Sgt. John Gilbert said they figured Compean was on the mountain at about 7,000 feet elevation, and the blasts of wind were “definitely a concern.”

“We didn’t have any information that he was adequately prepared to spend the night out in the wilderness,” Gilbert said.

The department tweeted: “Are You an Avid Hiker in the Mt. Waterman Area? #LASD SAR Teams need help locating a #missing hiker.”

Kuo, 47, inspected the image and thought, “I bet I could find that spot,” he recalled.

Kuo works in the tech industry, but he is also an amateur radio operator. For several years, as a hobby, he has used his Twitter account to alert the public about natural disasters. He regularly examines satellite imagery to identify and track local wildfires.

Plus, he has another unusual pastime: “I have always loved looking for where photos are taken,” Kuo said. He frequently tries to identify where movie scenes, television shows or commercials were filmed. He’s often successful.

So when he came across the blurry image of Compean’s legs surrounded by an endless landscape of rocks and vegetation, he instinctively pulled up a satellite map. Since the sheriff’s department said Compean’s car was found near Buckhorn Campground, he narrowed his search to the surrounding area.

“There’s an amazing amount of information you can get from satellites,” said Kuo, who is also a hiker, though he has never visited the area where Compean was lost.

The first thing he noticed in the picture were patches of greenery. “I realized he’s got to be on the south side because there’s not really any green valleys on the north side,” he explained.

That finding tightened his search considerably and helped him zero in on one area that closely resembled the terrain in the image.

The final step was cross-referencing the original photo with Google Earth and comparing specific details.

“By punching in the time and date that the photo was taken, you can compare the view in Google Earth,” said Kuo. “They matched.”

He shared a screenshot of the satellite imagery on Twitter and called the sheriff’s department to notify officials of the coordinates he uncovered.

After vetting the findings in relation to the information they were able to glean about Compean’s whereabouts, “we felt pretty confident that Ben’s information was good,” Gilbert said. A search-and-rescue team swiftly boarded a helicopter and flew to the area.

Fortunately for Compean, Kuo was spot on.

More than a full day after he went missing, the rescuers found him less than a mile from Kuo’s predicted coordinates.

“It was very gratifying that he was saved,” Kuo said. “If you have information that could help save somebody, that’s something worth sharing.”

“Ben’s help allowed us to get to that location much sooner than we probably would have,” Gilbert said. “It made a gigantic difference in us finding him.”

For Compean, who had spent more than 27 hours alone in the wilderness, hearing the vibrating helicopter hovering above him left him in tears. He was overwhelmed with relief, he said.

“I’m safe!” Compean, who sustained just a few minor cuts and scrapes, yelled repeatedly to no one in particular.

As an experienced hiker, he said it was never his intention to veer off the trails, emphasizing that there were no signs indicating that he had entered a potentially dangerous or closed-off zone. He later wondered whether signage blocking the area had been scorched by wildfires. 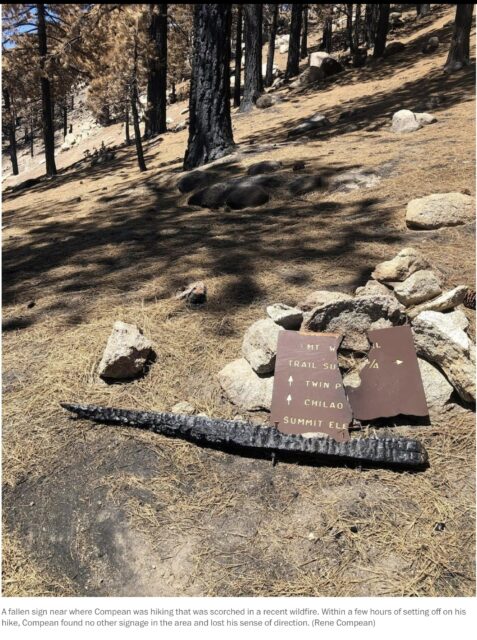 A fallen sign near where Compean was hiking that was scorched in a recent wildfire. Within a few hours of setting off on his hike, Compean found no other signage in the area and lost his sense of direction. (Rene Compean)

“I stay away from areas that are blocked or have signs that prohibit entry,” Compean said, adding that Angeles National Forest officials are reportedly investigating whether he entered a fire closure zone, though no one has contacted him directly.

He described his time alone in the mountains — with no flashlight and only a liter of water and a power bar in his backpack — as terrifying.

“I didn’t want to give up,” Compean said, adding that he kept trying to climb higher to make himself more visible. “I didn’t know if I would have made it another day there because I probably would have fallen trying to get to a higher peak.”

He yelled for help over and over, even as it seemed futile.

“It would just echo into the mountains, and I wouldn’t get anything in return,” said Compean, who eventually lost his voice.

He spent the night on high alert after spotting two mountain lions and a bear, he said, keeping a big stick and some sharp rocks beside him in case an animal came close.

Dressed in a tank top, shorts and a hoodie, Compean was chilled to the bone. He hugged himself into a tight ball, using his backpack to shield his bare legs from the frigid gusts that pounded him.

Gilbert said calls about lost hikers “is a common problem for our department,” adding that his team responded to 162 incidents last year.

To avoid running into potentially life-threatening problems, Gilbert encourages hikers to plan their route in advance and let someone know the trail they intend to take. He also suggests bringing a paper map since cellphone battery is finite, and investing in a personal locator beacon — which works in remote regions where cell service does not.

Compean’s story probably would have ended very differently, Gilbert said, had a total stranger with strong satellite skills and a sharp eye for detail not taken immediate action.

In fact, when Compean was finally pulled safely into the hovering helicopter, one rescuer wrote on a piece of paper, “You are so lucky.”

After the crew touched down and the hiker notified his family and friends that he was safe, the rescuers told him that Kuo was instrumental in helping to pinpoint his precise location.

Compean, who works as a mechanic, asked for the stranger’s contact information and set up a virtual meeting the next day to express his gratitude.

“I owe you my life,” Compean told Kuo during the Zoom call.

The two are hoping to meet in person next week for a celebratory meal.

“Maybe we’ll even go on a hike,” said Compean, adding that despite his near-death experience, he intends to revisit Angeles National Forest, his favorite hiking destination. But going forward, he vowed to be better prepared.

“I love the outdoors. I won’t let anything deter me from doing what I love,” he said

Above all, though, “I’m so lucky that Ben did what he did,” Compean said. “I’m thankful to be alive.” 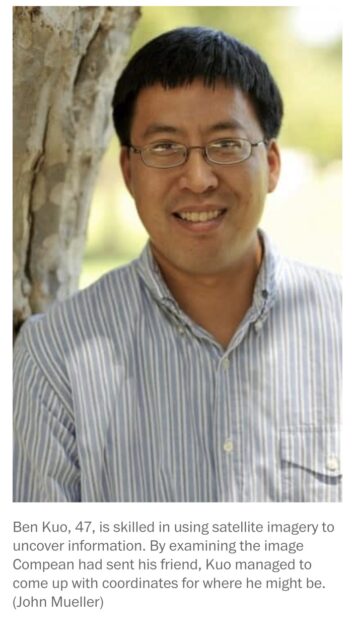