A Year-end Message from the Founding Director

At the end of the year 2022, we would like to express our deep appreciations of the donors (Chui-Shan and Rufina Chen; Bob and Jean Cheng; Hwalin Lee) for their generous gifts.  We should also acknowledge that we owe a lot to a transitional team who has worked meticulously and tirelessly from different locations over the last two years to help incorporate Taiwanese American Achieves into our Center website, on top of transferring related photo albums to the Geisel library’s digital resources: Jeff Chen, Judy Chen, Knight Chen, Xi Chen, Tony Hsieh, Ashley Lee, James Lee, and in particular, Susan Liu.  Together with several of our research assistants—Brandon, Jason, and Zach, they render UCSD a hub in Taiwan and Taiwanese American studies, in sharing not only important historical images, or Taiwanese American Who’s Who bio entries, but discussions on the changing status of China-Taiwan-US relationship, book talks, film showcase, and public events, among others, around Taiwan and Taiwanese America.

It has been a great pleasure to offer online blogs and archival narratives such as “My Stories” and “Our Journeys” to the public, as they show inspiring paths taken by Taiwanese Americans in their everyday life that quietly (and often consequentially) transform the community, making the world a better place.  A famous physician couple, for instance, have devoted almost their entire lives to taking care of others.  However, as they age and develop symptoms they know only too well for comfort, they must learn to cultivate the art of self-care and to accommodate a late style.  Their nuanced life lessons are both heart-warming and instructive.  As a matter of fact, there are far too many stories like this one, but unfortunately relatively little known in the social media despite their tremendous impact.

Of course, news of Taiwanese Americans winning a mayoral or congressional race would go public, but from time to time it is tragic incidents like the assassination attempt on a Taiwanese president or a medical doctor sacrificing himself to save the lives of others that get broadcasted.  In part a critical response to this, our Taiwanese American History (TAH) archives raise consciousness that the world can be better off if people get to know more about the achievements and diasporic experiences (including fears and hopes) of Taiwanese Americans in their professional fields, private lives, and communal contributions.  That is, about the ways in which Taiwanese/Taiwanese Americans develop good will and cultivate agency in resisting racism, in taking up freedom and responsibilities.

The questions of agency are constantly raised in our book talks hosted by the Center for Taiwan Studies.  A historical novel on the Rover Incident (1867), for one, reveals how ethnic, place, and narrative identities got constituted as the native tribal people witnessed how the Qing general and American diplomat used them just for their politically motivated self-gain.  (Regrettably, the dubious legacy continues.) Ethically reawakened though shocked, the local were forced to resort to oral tradition to keep their stories alive, so that the truth could be told.  Such a local and global cultural dialectics is a theme that prevails over our books talks—Hsiau’s book on 1970s nativism and social movements, for one.  In contrast, Two Countries by Mr. Li-pei Wu reveals a very different trajectory in highlighting ways to be competitive while engaged and collaborative in winning over international friends.  Through him, the ties between Taiwan and the US become increasingly much closer.   In yet another case study, a cold war militarized offshore island presents a mixed picture of war and peace, with its residents living in fears from 1947 on, traumatized by battlefield devastations and almost endless anti-Communist campaigns, but as of now, they entertain hopes of co-prosperity as promised by cross Trait talks and trade. Apparently, the citizens learn how to mediate between fears and hopes, to come up with more flexible identity stances.  In fact, the most recent general election result in Taiwan seems to echo such a change in mentality across major cities and counties.

Throughout the year, we have been very fortunate to be able to integrate projects, to host events, and to designate Formosa Intergenerational Family Chamber Music Group as our first group of artists in residence.  Though active mostly locally, the Group has played vital roles in transnational charity events, sending love to Kenya or Ukraine, for example.  We will invite the Group back to participate in the Grand Opening tentatively scheduled for the early May, in addition to hosting more forthcoming book talks and workshops.  Please stay tuned.

Sadly, we also suffered loss of several dear friends in 2022.   Our condolences and prayers go to the Tsuang and Zhang families.  Professor Ming Tsuang and his wife Snow contributed generously to many events on Taiwan.  Ming was instrumental in establishing Taiwanese Language Program at Harvard University, and later in setting up the Chuan Lyu Endowed Chair in Taiwan Studies at UCSD.  Through family channels, we heard that Snow passed away peacefully on October 10.  In the memorial service, our priest friend reassured us that in spite of the insufferable loss and pain, Professor Tsuang showed great strength and the will to live, to complete his research projects.  We wish him well.

We learned rather belatedly that Professor Yingjin Zhang, formerly Literature Department Chair, died in Shanghai suddenly on June 15.  Yingjin was most supportive of Taiwan Studies Center from the very beginning.  He helped me to initiate in 2011 a proposal to establish a Taiwan/Sinophone Studies center.  Four years later, Professor Lei Liang (of Music) joined us to talk to the administrators about such a center.  Dean of the Arts and Humanities was particularly surprised to find that Yingjin and Lei should provide more than enthusiastic stamps of endorsement for a Taiwan center, even though both were originally from mainland China. It is only when we came up with 5 million as committed by Chiu-shan and Rufina in 2021that the Center got launched. Upon hearing the news, Yingjin was the first to congratulate us. Before his untimely death, Yingjin teamed up with Professor Kuei-fen Chiu of National Chung-hsing to publish at least three books on Taiwanese documentary film, Taiwan cinema, and world literature of the Sinosphere.  He will certainly be missed.

I am sure our dear friends are now looking over us from heaven to whisper with a big smile: “Fuel up” to bring forth more good work 加油！Please stay healthy and happy平安喜樂！

With all of these in the background, we wish everybody a wonderful and productive year ahead!

All the very best, 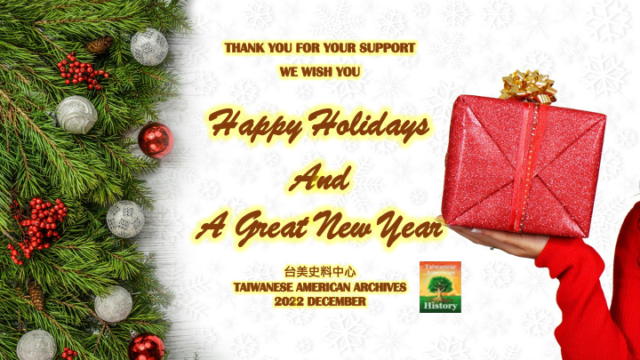