Over 50 Years of Leaders Serving the Taiwanese American Community

TAF is best known for its annual week-long Summer Conference that is attended by over 400 campers in Juniors (grade school), Junior High (middle school), Youth (high school), tafLabs (young adult), and Parents.  The TAF Summer Conference rotates between 4 themes each year: Identity, Communication, Ethics and Values, and Servant Leadership. The themes were designed to be building blocks that cultivate each Taiwanese American’s leadership potential. To grow into effective and confident servant leaders, Taiwanese Americans must first know who they are and then learn how to communicate.  Campers will then learn how to develop the courage to make difficult ethical decisions that may come their way before learning how to become servant leaders.

TAF provides servant leadership training to help individuals develop their leadership skills. Starting with Youth program, high school-aged campers have the opportunity to begin their training by serving as Coordinators. Coordinators plan the TAF Summer Conference activities such as the Big Sib/Little Sib program and TAF Night (talent show).  Coordinators have the opportunity to continue their leadership training with increased responsibilities by serving as Counselors, Advisors, Program Directors, and beyond.

With origins in 1966, TAF is one of the oldest and largest established organizations serving the Taiwanese community in the United States.  In over 5 decades, TAF has developed personal and servant leadership in over 5000 Taiwanese-American, Canadian and international youth through the building of strong cultural and social ties within the Taiwanese American and global community.  Founded originally in Chicago as the Midwest Formosan Christian Foundation (MFCF) by William “Bill” Cho and Dr. James “Jim” Chen, the initial organization sprouted from the large wave of Taiwanese graduate students immigrating in the United States in the mid-1960s who started families in the Midwest after completing their studies.

While other Taiwanese American Associations (TAA) were springing up throughout the country to support these first generation Taiwanese Americans, several families with Christian roots decided to meet every summer and established the MFCF to focus on bringing their children together at a week long summer conference.   The desire to connect their Taiwanese cultural heritage, Christian faith and the growing Taiwanese American community led the MFCF to build the foundation for TAF with programs to encourage fellowship in the second generation of Taiwanese youth with activities in music, arts and Taiwanese culture.  Social programs during the Summer Conference culminated in a Taiwan Night talent show where the children played their instruments, sang in a choir and performed a choreographed Swing Choir. 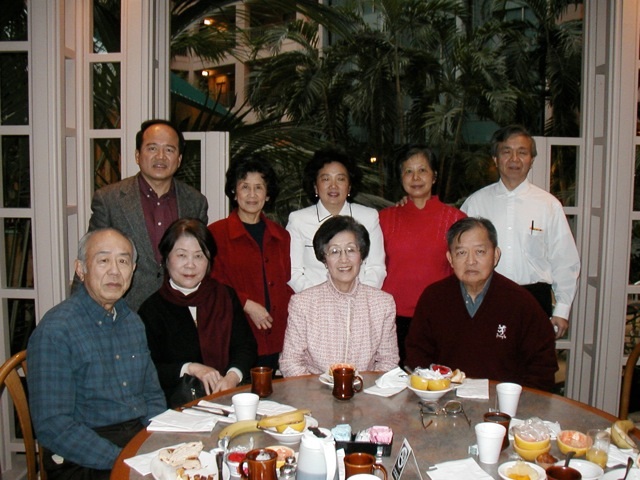 Following a period of steady growth, a second wave of Taiwanese immigrants arrived in the United States during the late 1970s such that the MFCF felt the need to be more inclusive and officially formalize itself as the Taiwanese American Foundation (TAF) in 1980.   The MFCF rebranded into TAF as a non-religious, non-political organization gathering at Calvin College in Grand Rapids, Michigan for a Summer Conference during the last weeks of July to August.  Attendees were primarily from the Midwestern US and Canada as well as drawing Taiwanese Americans from the East and West Coasts as well as Taiwan and other international locations such as Brazil.

The original MFCF group had developed young adult leaders who had the desire to grow their Taiwanese cultural roots and train the upcoming second generation Taiwanese-American youth as TAF servant leaders to make an impact on the Taiwanese community in America.  One of these young adult leaders was Bob Tse-Weng Lin, who established the small group structure of the Youth Program, the hallmark high school age group that met with limited parental involvement and supervision during the week.

It was during this time when TAF began thinking about a structure to develop leadership skills specifically for Taiwanese Americans and thus the rotating themes of Identity, Communication, Ethics and Values, and Leadership was borne.  Bob helped to develop servant leaders who led small groups of Youth in a structure that remains to the present-day.  A duo team of Advisors leads a small group (5-10 kids) through thoughtful discussions presented by a speaker for the week.

With the support of the first generation parents, Bob encouraged the Youth to explore their identity and combine their talents to be compassionate leaders and experiment with programming activities such as Big Sib/Little Sib, Yearbook, TAF Night talent show and slide show demonstrating servant leadership by providing guidance for the Summer Conference events.  Around 1995, the small group structure was then expanded to the Junior High program where age-appropriate activities and discussions centered around the rotating theme.  After success with the Junior High, the Juniors program was formalized with small groups to enhance the TAF experience for elementary school aged children. As with the other programs, TAF designed age-appropriate activities for Juniors to learn about Identity, Communication, Ethics and Values, and Servant Leadership.

After a period of rapid growth through the end of the 1990s, TAF outgrew the Calvin College campus and relocated to the Manchester College (now Manchester University) in North Manchester Indiana in 2000, where it remains today.   A college age program was developed to address the growing post-high school group and also provided an outlet for those trained servant leaders to come back to TAF to contribute their time and talents.  Many TAF Alumni (TAFers) wanted to give back what they had learned during their childhood years going through the Junior, Junior High and Youth Programs.  This further culminated into tafLabs, a strike team-level of post-college young adults who initiated further programming changes to support TAF both during the week of the Summer Conference and post-conference activities.  tafLabs sought out new and innovative activities which pushed boundaries and explored maximizing each TAFer’s background and talents to contribute to and grow TAF as a whole, such as Night Market, media, and support of the TAF Staff. 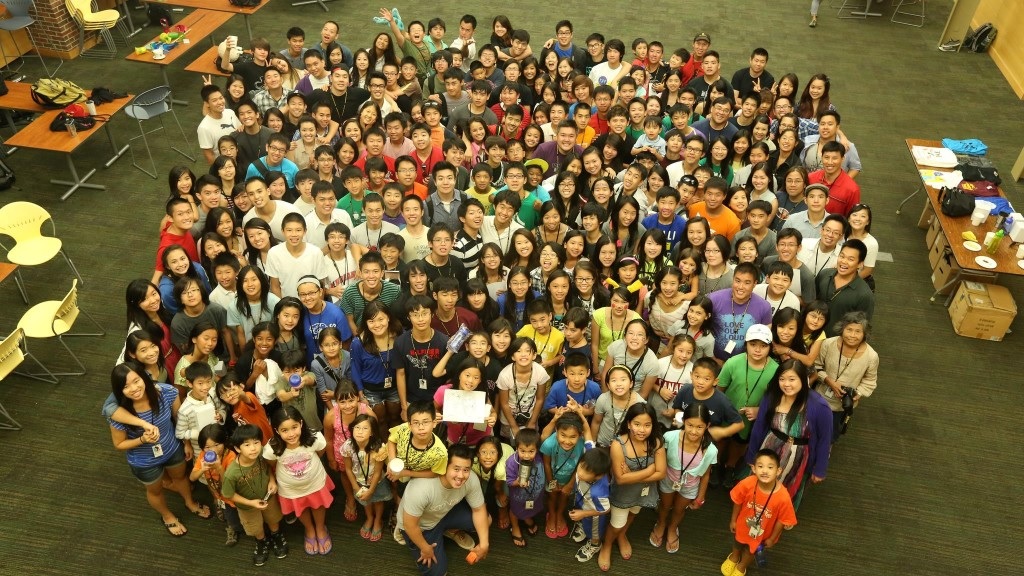 Today, TAF continues to grow with more programming and activities originating from all of the servant leaders trained through the 4 rotating themes and activities.  TAF’s extra conference activities and programs have also expanded to continue the annual New Year’s Eve celebration, a taf(x) weekend conference, TAF events and gatherings all over the world for TAFers.  TAF continues to meet the needs of third generation multi-racial Taiwanese as well as developing activities and addressing up and coming social aspects such as gender identity, social justice and community service.  Throughout the years, TAF has maintained the core servant leadership focus to foster personal growth as a common thread to connect TAFers to make a profound impact on mankind in unique and compassionate ways for the benefit of the Taiwanese community and greater world society. 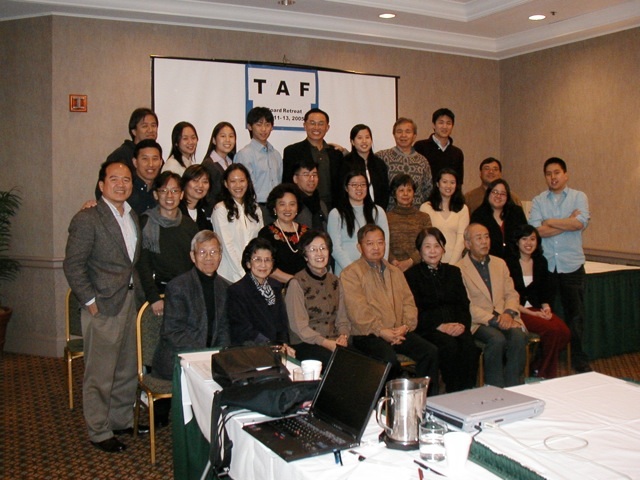 This photo had taken during 2004 some TAF Directors (both parents & youth counselors in 2004 Winter Retreat.

It is a most fascinating question that can be raised, “How MFCF/TAF can be sustained and continued for five decades (1966-Present) existence?   It is a natural progression, being moved by the collective leadership and Christian Faith.    It has been proven that in 1966, there were several scattered Taiwanese Christians, who had begun to raise their families and children, and to settle down after the completion of their graduate studies from American Universities to be professors, lawyers and various professions.    We believe that owing from our enthusiasm, conviction and Christian Faith, it had been motivating us to move forward, to love our families and children, plus always embracing Taiwanese Consciousness in our heart.

This 1981 Conference had signified as the Turning Point for TAF Existence.  And, then, we had promoted our specializations in music and youth leadership training programs for every year to present and so on. 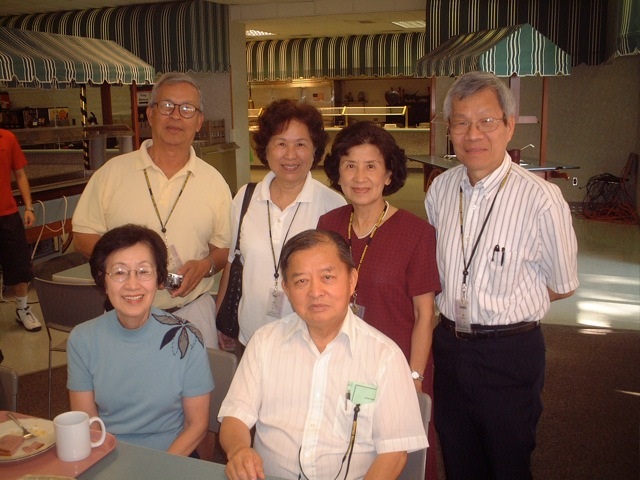 There were two significant programs, that had been created right after the inception of TAF on October 18, 1980 by a by-law of the first TAF Board of Directors (being passed by Dr.  Ming T. Tsuang(莊明哲), Dr. Sidney Chang(張信義), Dr. James Chen (陳植哲), Dr. Tonnny Hung(洪宏謨), Charles Yang(楊忠正) and Bill Cho(卓甫良)) in Chicago, that had concurred to rename MFCF to TAF.

Since then, TAF had initiated first two new programs: 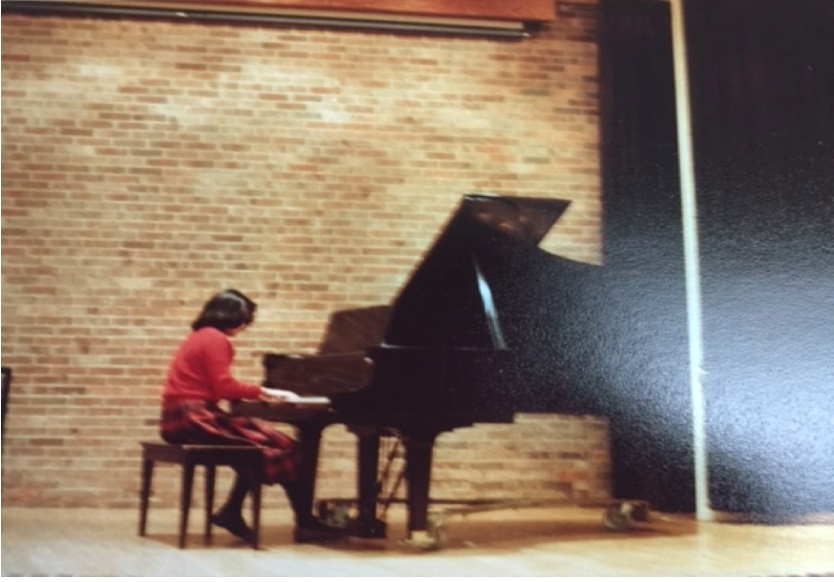 Then our tale could  be stated by narrating into two parts: (Part I) denoted an interval of 1966 -1973 that was formulated a series of annual Christian Bible Camps by our reverend Taiwanese Theological Pastor and/or Scholars like  Song, Tsang-shen (宋泉盛); Loh, Wei-tao (駱維仁) , Toh, Choung Shing (卓忠信); Rec. Andrew Chao (趙聰仁): (Part II) ought to be referred  to a time of incorporation in the State of ILL as a Non-Profit Organization for  promoting cultural and educational advancement.   Hereafter , with the delicate efforts of Carol Cho (林秋菊)  Sue Chen 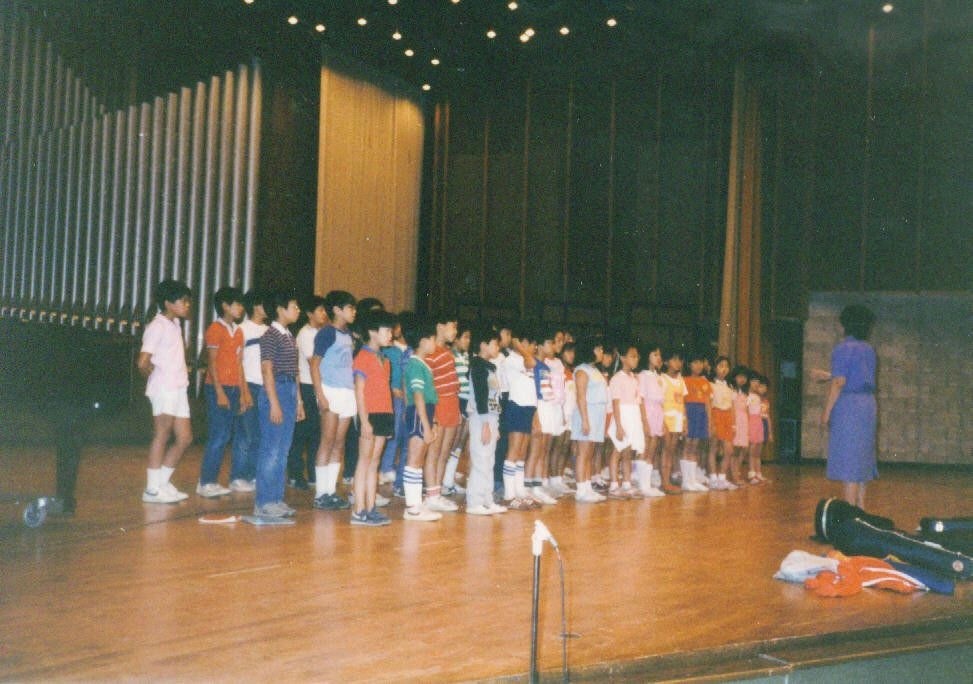 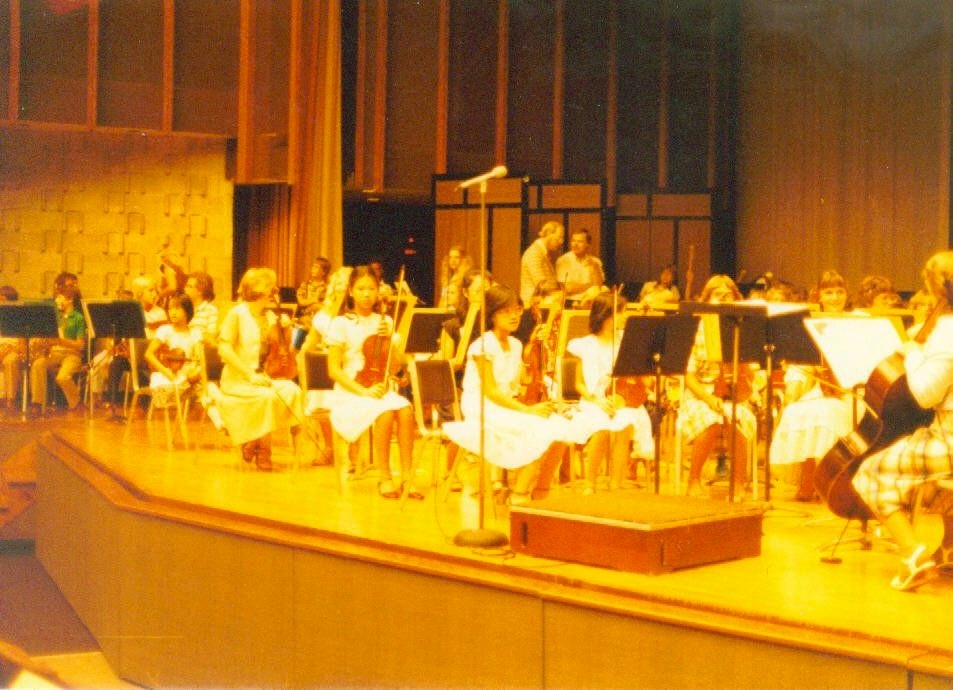 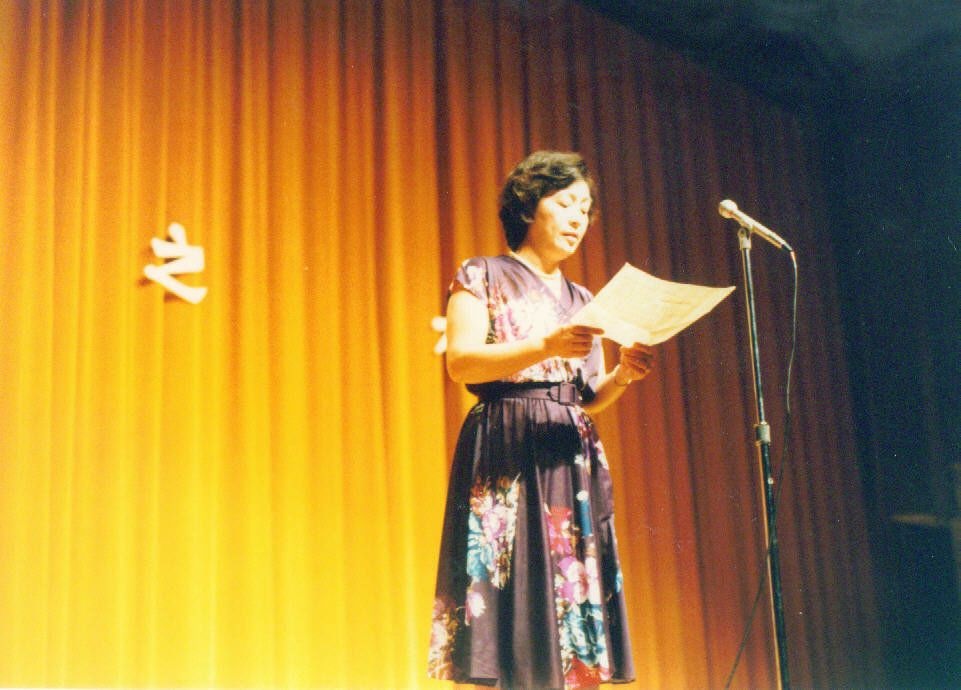 Carol had sung a song of lament and aspiration of our folks here toward our mother land, TAIWAN from Verdi’s persiero  Nabucco with her deep feeling: that had been translated by Rev. Tin, Jyi-giokk (鄭兒玉), & Lin, Chhian-chihian (林千千); officially being called as in Hang-Ji as (流浪海外台灣人的心聲);  in English, as “Lamentation of TaIwanese in Exile”. 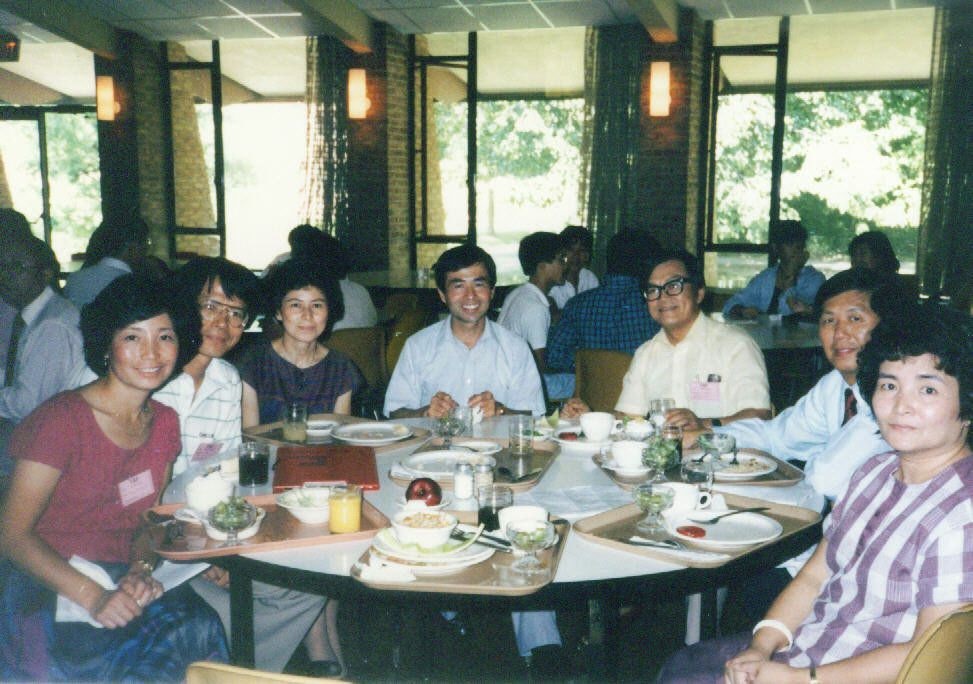 In closing,  it seems with above limited PHOTOS,  that were all in our tender reflection memory.   Here, since the establishment of TAF in 1980,  Dr. Ming T. Tsang

(莊明哲) was the first Present, who had advocated the importance of Parents and Youths Communication: such Dialogue Session have become a center piece of TAF Annual Camp every year.

However, prior to 1973 back to 1966.    Dr. John Ying (殷宗舜) of Indiana, Dr. Philip Shieh  (謝伯芳) of Kalamazoo, Michigan, Rev. Andrea Chao (趙聰仁) of Twin Cities, Minn, now reside in Luguna Wood, CA:   they had contributed and collaborated our yearly Taiwanese Christians Fellowship and Bible Retreats programs.   We all remembered them well, especially Rev. Chao now resided in Laguna Wood, Southern California, and he looked well for his 86 years old age,  since the inception of TAF till present.     Then, Dr. Sidney Chang (張信義) had served as the second TAF President, and stressed the importance of Youth Works (Junior, JH, and High School Youths).  And Dr. Tien C. Teng (鄭天助)  had served as the third President, and started to invited Taiwanese speakers, Rev. Chang, Shing-it (張信一) and Chen, Choug-jit (陳中潔).   And then the fouth President, had been served by Bill.   Besides Bill had undertaken a role of TAF Executive Director, since 1973 to 1987.

It has been a long time since 1966, that passed five decades long.   I am glad that MFCF-TAF has  become the cornerstone of Taiwanese American Community.     May it be that this short PHOTO ALBUM become as a humble gift to T.A. Community

Remark: Here, an extra insert of video clip as a part of this write-up to raise our spirit and feeling toward TAF: