The Austin Taiwanese Association (ATA) was founded in 1970 by Mr. Mu-Sheng Wu (吳木盛) and other graduate students of the University of Texas at Austin (UT). Initial members numbered around 40.  Since there was no previous organization, the association had to be built from scratch, everything from setting up the bylaws and terms, organizing events, handling finances, and finding meeting spaces to rent.

At that time, being a graduate student was pretty much the only way to leave Taiwan and immigrate to the US.  The Taiwanese immigrants had many natural ties to each other having no other family here in such a foreign world and a strong case of homesickness for Taiwan.

Since most were the first ones from each family to come to the US, they did not have any other relatives and by default became each other’s family. Holidays were spent at each other’s houses and family friends naturally expanded to become extended families. They looked to each other for advice on the difficulties of raising children in another world, celebrated events together and cooked traditional Taiwanese food to remind them of home. They were naturally frugal, humble, and hard-working, just doing what it took to build a new community for their growing families. Connecting them even deeper were their similar social, cultural and political beliefs.

There were two different groups of students from Taiwan at the time.  One group considered themselves as “Chinese Nationals”.  This group’s parents fled from China to Taiwan with Chiang Kai-shek and his Kuo-Ming-Tang (KMT) party after escaping from Chinese communists in the 1940’s.  They usually attended the “UT Chinese Students Association”.

The other group considered themselves as “Native Taiwanese” and whose ancestors had already lived for hundreds of years in Taiwan. They had many differences in background, language and political viewpoints with the other group and the majority of these immigrants in Austin came to be the initial members of the ATA.

Martial law was declared in Taiwan soon after the arrival of the KMT in the 1940s. Through the 1970s, the Taiwan Government was controlled by Chiang Kai-shek and a system to brainwash all the native Taiwanese people to become Chinese was imposed. All traces of “Taiwan”, both as a country, a language and even a term were forbidden.

They disapproved of any groups with even the word Taiwan in the title. For this reason, when the ATA was first formed they tried to avoid the attention of the Taiwanese Embassy.  The group was even officially registered as the “Formosan Club” at UT and only privately referred to as the ATA.

The ATA members all cared deeply about the future of Taiwan and were worried about what the oppressive KMT government was going to do to their homeland.  Even though they were thousands of miles away, their new country, the United States, allowed freedom of speech and therefore the opportunity to fight for their home country.  They used their voices from afar to defend the Taiwanese people’s human rights since the people of Taiwan could not do this for risk of persecution.  However, the same persecution applied to them even in the US.  Attending the ATA was almost not allowed by the Taiwan government. The members risked being placed on the government black list and be forbidden from returning to Taiwan.  The founder, Dr. Mu-Sheng Wu (吳木盛), was one of those placed on the black list and he and his family were not allowed to return to his homeland, Taiwan, for 17years.  Only after martial law was repealed in 1987 was he able to return to the homeland.

According to UT rules, all students’ activity needed to be sponsored by a UT   faculty member.  Finding a Taiwanese faculty member was difficult and the first adviser was a Caucasian professor.  When economics professor Paul Yu (游伯龍) came to Austin in 1974, he became the first Taiwanese American adviser for the ATA.  After Dr. Yu left Austin, UT Asian Library director Kevin Lin (林發祥) stepped in.  These initial advisers were greatly appreciated given the trouble they risked from Taiwan’s Embassy.

Both Dr. Yu and Mr. Lin were actively involved in ATA activities.  They routinely invited Taiwanese students to their homes during the holidays.  This really touched the member’s hearts given that they were thousands of miles away from home.

Taiwan had a very restrictive political climate for more than four decades and martial law was finally lifted in 1987.  Even then, the only political party in existence was the KMT and they controlled the island through intimidation tactics.  Any statements considered critical of the government could result in financial penalties, loss of business, police beatings or even false imprisonment.  Most people were afraid of being targeted and tended to avoid those who were already affected.  This lead to further social isolation to those targeted.

The ATA knew they were blessed to be in a country that protected freedom of speech and wanted to extend their support to those brave enough to promote it in Taiwan.  The ATA tried to invite to the U.S. anybody that fell into trouble speaking against the KMT in Taiwan.  In the 1980s and 1990s, they invited several former political prisoners such as Mr. Shay謝聰明, Mr.Shih 施明德, Mr. Shi史明, Mr. Chung 鐘逸人 and Mr. Yang(楊碧川).  Many others with KMT opposing viewpoints were invited over the years.  A few examples include the Taiwanese Farmers’ Rights Movement organizers which included Mr. Hsu(許能通), Mr.Cen( 陳德秸) and 4 others,  Mr. Chen Shih-Meng(陳師孟), Mr. Chu(邱垂真),  Mr.Chiang(江蓋世),  Mr. Hsu(許榮琪), and Ms.Yeh葉菊蘭.  Each time they were hosted at an ATA member’s house such as Kevin Lin (林發祥)  and Peter Wu(吳宗憲) and were invited to give speeches to the Austin Taiwanese Association.  At the very least, the guests would know that there were people who supported them and knew what they were enduring.  In addition, the U.S. was seen as a very powerful influence on the Taiwan government.   By letting these brave people become better known, it helped reduce pressure on them and also focused attention on the lack of political freedom in Taiwan.

Other political activities included an organized protest at the Taiwanese government representative office in Houston regarding the violation of basic human rights and more than 40 years old martial law.

When in 1993, the Taiwan government claimed that they were the Republic of China and proper rulers of China, the ATA took out an ad in the Daily Texan with an essay asking the Taiwanese government to say they are not a part of China.

After 30 years of working hard to promote democracy and freedom for Taiwan, the members of the ATA are quite happy to see today’s Taiwan become a democratic, free country with human rights.

The members also wanted to preserve their culture and would gather to celebrate important holidays in Taiwan such as the Lunar New Year Celebration, Mid-Autumn Festival, and Dragon Boat Festival.  They would sing Taiwanese songs together during the gatherings. One of their favorites was “My Hometown in Sunset” (黃昏的故鄉).  Since at the time some members had not returned to Taiwan for a long time, tears were common with this song.

Host family programs have been organized by the ATA over two periods during the 1970s and 1990s.  Some married ATA members volunteered to serve as a host family for Taiwanese students.  They would provide assistance such as providing rides to attend ATA activities and church activities and provided advice related to legal, medical, financial, child and educational topics. Some host families treated Taiwanese students over the holidays such as Thanksgiving or Christmas.

In 1981, UT Taiwanese students formed a separate Taiwanese Students Association.  Over time the original ATA members had graduated from UT and started working in the Austin community which naturally created different needs and goals from the current UT graduate students.

Before the reorganization, the president and vice president of the ATA were elected by all ATA members at an annual meeting. There were no other positions and no official assistance to the two elected officers in performing the association’s regular operation.  With this problem in mind, the ATA president at that time, Dr. Kuan-Yu Fu (傅寬裕), invited Francis Pan, Peter and Pearl Wu to draw preliminary new bylaws.  They devised a board of directors consisting of 5 executives, each elected by all members at an annual meeting.  Then the ATA’s president and vice-president now were elected by the five executive directors.  The new bylaws were passed at the ATA annual meeting in late 1986.

For the second generation Taiwanese Americans living in Austin, Taiwan is a very foreign and faraway place and they lacked the opportunity to explore and understand their own culture. Pearl Wu (楊碧珠) created a Taiwanese Language School that ran for several years.  This was held in a borrowed a classroom in the UT Engineering building.  Pastor Shen-Hung Hsu (許勝宏) of Austin Taiwanese Presbyterian Church and Dr. Kuan-Yu Fu (傅寬裕) served as our Taiwanese language teachers.  Later, the ATA even sponsored a “Taiwanese Speech Contest” with the Mother’s Day celebration from 1996 to 1999.  Each winner received a monetary award.

Practically all Taiwanese parents forced their children to learn to play a musical instrument.  Orchestral instruments were by far the most popular.  The parents were very competitive, pushing their children to be the best even in this endeavor.  Giving these Taiwanese kids a chance to perform for the Taiwanese community, Pearl Wu (楊碧珠) started the annual ATA Mother’s Day Concert which ran from 1987 – 1999.

In the 1970s, the Taiwanese graduate students formed their own softball team and which played every. There was even a Texas state wide recreational tournament for the Taiwanese community in Houston but the Austin team was always in the last place. When Peter Wu served as the president of the ATA in 1991, he formed a second team composed of the second generation Taiwanese. This was a much more organized team and even was equipped with official uniforms with the ATA logo. They were also more successful on the field than the 1970’s team as they finished second to last place.
In the picture, Team Representative(clockwise from standing) :Peter Wu吳宗憲(coordinator), John Lin, Gorge Chen, Wile Ho, Dan Fu, Ryan Wu, Mr. Shou-fan Yang楊壽芳(coach), Mr. Kuan-Yu Fu傅寬裕(assistant coach), David Yu, Luke Fu, Everett Lee, Chris Lin, Mark Chen.

Peter and Pearl Wu designed for the ATA a T-Shirt promoting Taiwan with the words “A Country for Freedom & Democracy.” This shirt was presented to:

Lamar Smith, US House Representative, during a town hall meeting at Westlake High School on  December 12, 2003.

Dr. Terrill, a scholar of Taiwan related studies, at the University of Texas at Austin on August 14, 2004. 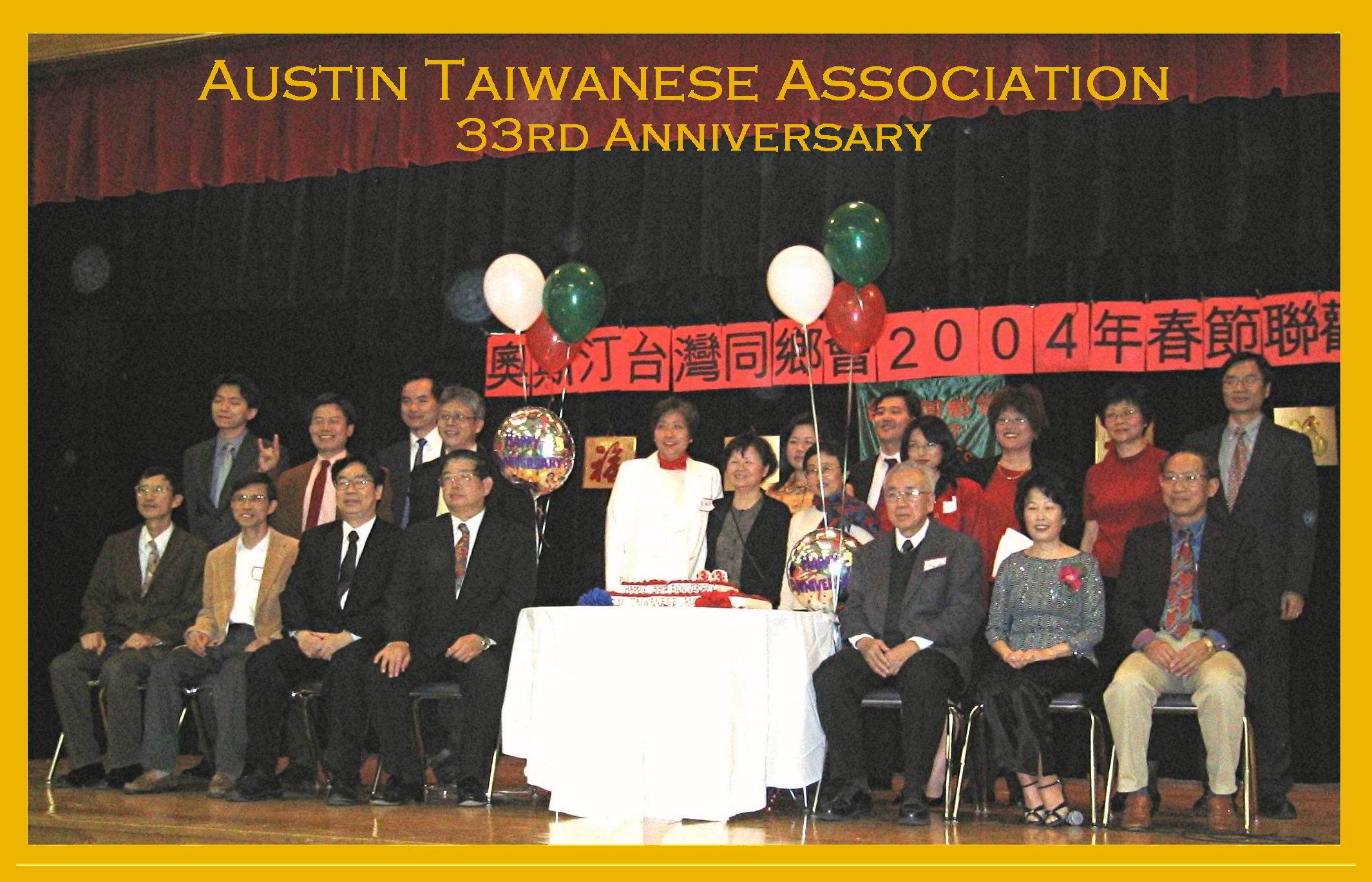 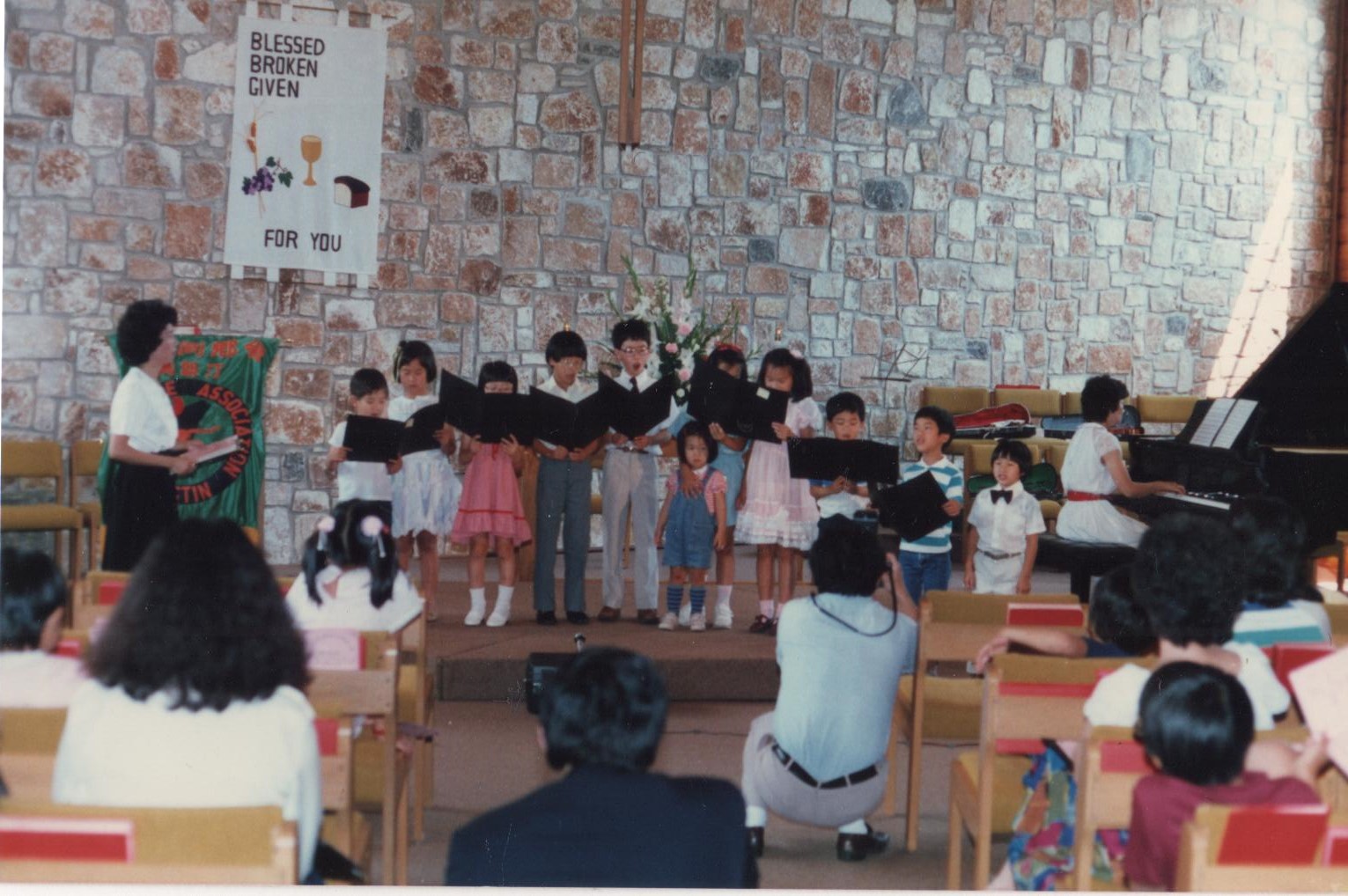 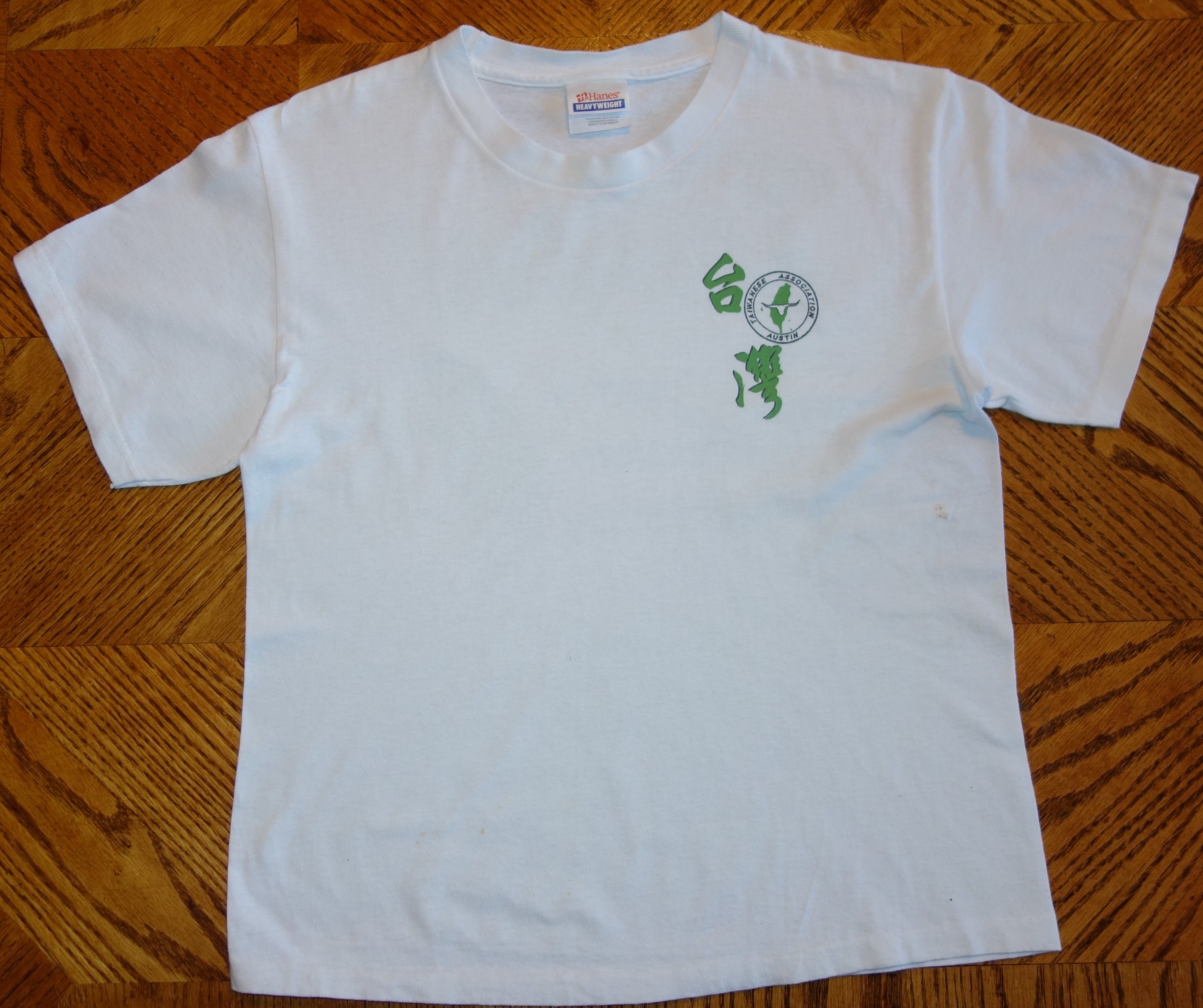 Austin Taiwanese Association (ATA) {德州奧斯汀台灣同鄉會} is a non-profit organization  that serves the Taiwanese American community in the Austin, TX metropolitan region.   All board members of the ATA are volunteers and are elected by the members.