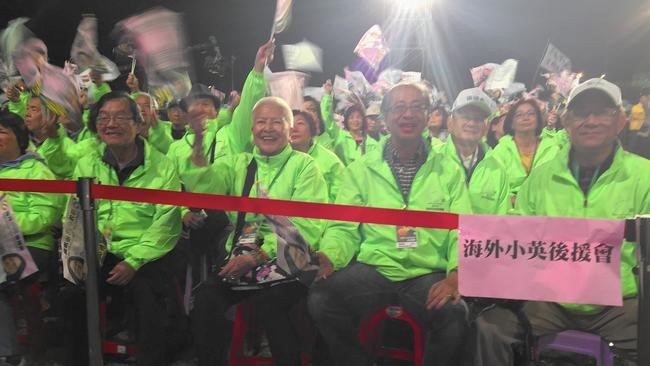 Members of the Friends of Tsai Overseas await the arrival of presidential candidate Tsai Ing-wen at a rally in Yuanlin, Taiwan. (Julie Makinen / Los Angeles Times)

Taiwan native Kenneth Wang was not yet 3 years old when the secret police came for his father in 1947.

Educated at prestigious Tokyo University, Wang Yu-lin was the first Taiwanese to serve as a district attorney during Japan’s colonial rule. But that made him a marked man in Taiwan after the end of World War II — when China’s Nationalist-led government took control of the island and began a bloody campaign of terror and repression against scholars, physicians and other elites. Historians estimate 10,000 to 30,000 people died.

“My mother went to ask for his body. They denied they had even taken him,” recalled Kenneth Wang, who moved to the United States in the 1960s and now lives in San Diego. “We never found out where he was.”

On Tuesday afternoon, Wang stood by the roadside in Lukang, a small township in western Taiwan, wearing a chartreuse windbreaker and a wide smile of anticipation as he waited to cheer on presidential candidate Tsai Ing-wen as she passed by in her campaign Jeep. Tsai’s Democratic Progressive Party is poised not only to win the presidency in Saturday’s election, but also is likely to sweep the Nationalists, also known as the KMT, and their allies out of control of parliament for the first time since Taiwan’s modern political era began in 1949.

“Seventy years — it’s been a long struggle,” said Wang, who has a doctorate in electrical engineering and also invests in real estate. “Finally, we are going to overcome the KMT.”

Wang and about 100 other Californians make up the bulk of a 160-member entourage of people born in Taiwan called Friends of Tsai Overseas who have paid their own way back this week not only to cast ballots — the island has no absentee voter system — but also to witness a change of power they see as a critical step in cementing Taiwan’s democracy. For Wang and many of the others, the political journey is intensely personal.

“My dad was an [anti-KMT] activist in the 1980s, and he received threats — some that even mentioned me, my middle school, the route I took,” recalled Wendy Yang, a 39-year-old attorney who practices in Rosemead and joined the tour with her mother. “He sent us away for our own safety. That was 1992. You would think our democracy movement would have taken off by then, but it was not fully matured.”

As American as she’s become over the last quarter-century, says Yang, “I can’t stay away from Taiwan. That tie is always there.”

The boisterous theatrics of Taiwanese campaign rallies — think lion dancers and men pounding traditional drums, but also stilt-walkers, pyrotechnics and even giant inflatable spiders — can make it easy to forget that the island held its first direct presidential election in 1996, after the end of nearly four decades of martial law.

The DPP’s rally Tuesday evening at a park in Yuanlin City had a vibe that was part rock concert, part religious revival. Wang, Yang and the rest of their green-jacket contingent arrived on five buses and got prime seating near the stage.

Simon Lin, an anesthesiologist at Whittier Hospital, bounced about giddily with his Canon EOS 7D with a 200-millimeter lens, snapping photos of speechifying candidates and flag-waving DPP supporters. When 20 members of his delegation were invited onstage for some official recognition, Lin clambered on top of a purple plastic stool to capture the moment.

Both Tsai and the KMT presidential candidate, Eric Chu, visited Southern California last year to drum up support among Taiwanese expatriates. Taiwanese airlines offer deals for election week, but because of the distance and the expense, only some overseas Taiwanese are able to make the journey home to vote. About 2,900 cast ballots in the 2000 election, when the DPP won control of the presidency for the first time.

In 2004, that number more than doubled, to 6,300. But since then, participation has been dropping off. This year, only 2,317 overseas Taiwanese successfully registered, and maybe 1,500 will actually vote.

KMT supporter Jean Ho, 62, a retired travel agent from Alhambra, has been voting in Taiwanese elections since 2000.

“The KMT has helped Taiwan become what it is,” said Ho, though she added that Chu’s poor polling numbers have discouraged some of her KMT supporter friends from making the trip this time. But she’s not giving up. “We have to persevere. We don’t know how it’s going to end yet,” Ho said. “If you fly back to Taiwan right now, the planes are all full of voters.”

Although the number of returnee voters in Taiwan has been waning, political leaders say they still play an outsize role in the last critical days of the campaign. Since arriving last weekend, Yang’s group has been attending two to three campaign events daily, in cities including Kaohsiung and Tainan.

“These people who manage to do well in the U.S. or Canada, they’re outstanding people; they’re exemplary people. When they return to their hometowns, their support carries extra weight,” said Lai Ching-te, mayor of Tainan, one of Taiwan’s largest cities. “Many of their family members back the candidates they vouch for.”

But beyond their role as opinion leaders, the returnees are also a welcome source of donations — and pure hustle.

On Tuesday afternoon, when Tsai showed up in sleepy Lukang to help boost her party’s local parliamentary candidate, the film director Chen Wen-bin, the streets were hardly thronged with people. As Chen and Tsai set off in a caravan including a loudspeaker truck, rolling past pineapple vendors, women shucking oysters and roadside temples swirled in the smoke of smoldering incense, the overseas returnees sprang into action.

They deployed at key intersections across the city, enthusiastically waving flags and unfurling green banners as the motorcade passed, giving the dozen or so photographers atop a media truck something lively to shoot. When the procession came to an end, they massed in a vacant lot and led some throaty victory cheers. “Dong suan!” they chanted. Get elected!

“When I see all these overseas Taiwanese coming back, it’s like a big family reuniting,” said Chen, the parliamentary candidate. He says if his party is able to capture control of the legislature, it will presage a historical shift for Taiwan, whose political status has been mired in ambiguity for decades.

After China’s civil war ended in 1949, leaving the Communists in control of the mainland and the Nationalists ruling on Taiwan, each side insisted it was the rightful ruler of all of China.

For decades, Washington was a close ally of Taiwan’s KMT-run government, valuing it as an anti-red bulwark and largely turning a blind eye to the party’s excesses. Until the late 1970s, the U.S. and many other Western countries had formal diplomatic relations with Taipei, but not Beijing.

That situation has reversed as China’s communist leaders have used the nation’s growing economic clout to press many countries to cut ties with Taipei; Taiwan is excluded from the United Nations. Beijing continues to insist that Taiwan and the mainland are part of “one China” and must be reunited some day.

But many Taiwanese — especially younger voters who are a key base of DPP supporters — reject that notion. They say they yearn for more than de facto independence, and want to be a “normal country.”

Chen said he hopes overseas Taiwanese can play the role of ambassadors when they go back home, lobbying for Taiwan with their own country’s elected representatives — especially in the U.S., which remains a key military and political ally of the island.

“Starting this year, Taiwan is going to take some steps toward ‘normal’ statehood,” predicted Chen. “These overseas Taiwanese can witness this election, this important moment.”

“But they can also take our message back to their home countries and home media,” he said, “to explain Taiwan’s need for democracy and need for international support.”

Times staff writer Frank Shyong in Los Angeles and Yingzhi Yang in The Times’ Beijing bureau contributed to this report.