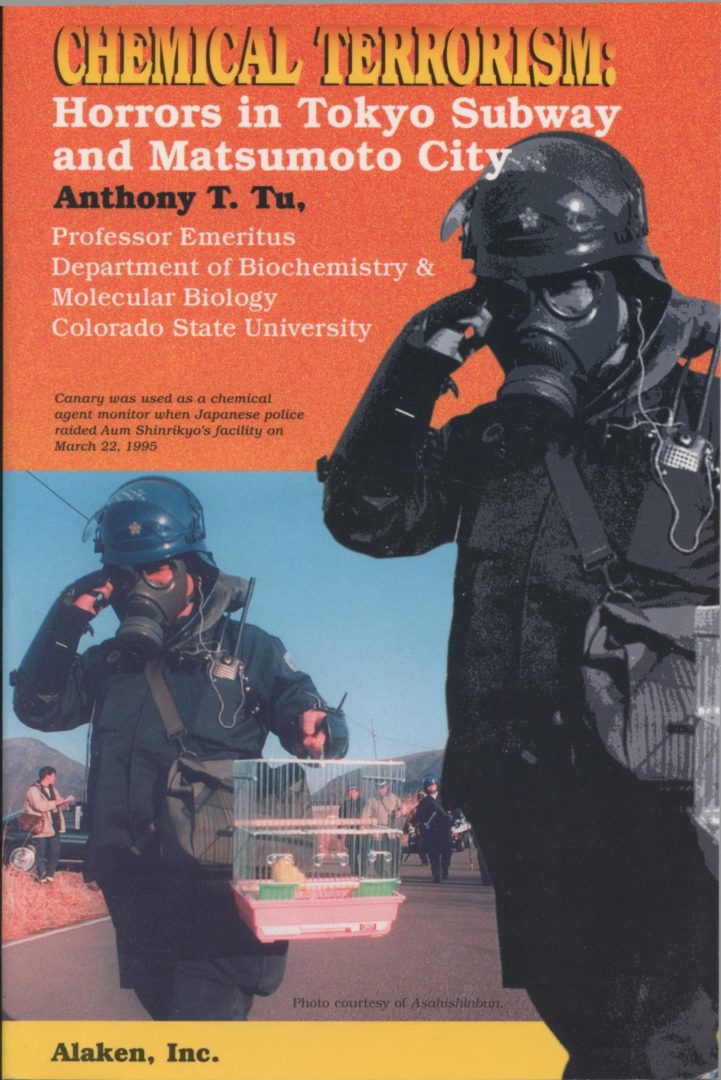 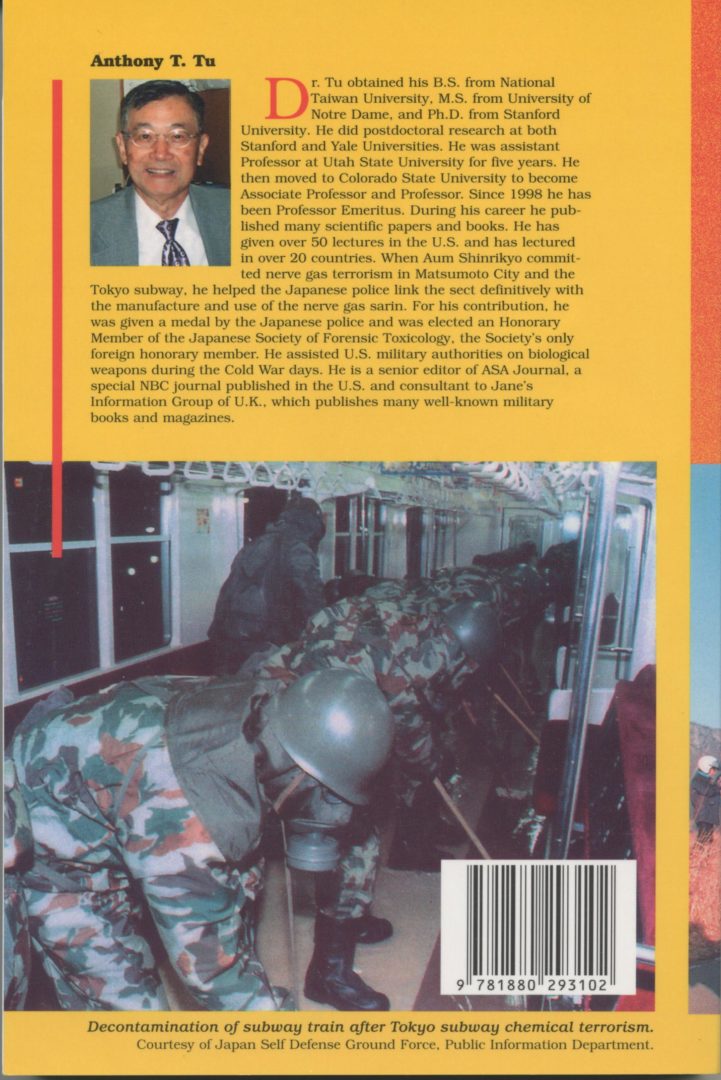 Both Matsumoto City and Tokyo subway chemical terrorism attacks shocked not only the Japanese but also the entire world. Sarin is an extremely toxic gas stockpiled by many countries as a chemical weapon. Until 1994 in Matsumoto City and 1995 at the Tokyo subway, it was generally believed that sarin would be used on the battleground. But this myth was shattered by these two incidents when sarin was used on defenseless civilians. These terrorist attacks were totally random and senseless.

When the sarin incident occurred in Japan in 1994, I had recently written several articles on sarin in Japanese. Therefore, I received many inquiries from Japanese journalists. Eventually the Japanese police contacted me for assistance. Among the information I provided was how to detect sarin degradation products from soil, which was found to be very useful in the investigation.

Because of my personal involvement, although it was a very small part in the overall investigation, I developed an interest in and kept up with the developments concerning Aum Shinrikyo’s chemical terrorist attacks. This is the main reason this book, Chemical Terrorism: Horrors in Tokyo Subway and Matsumoto City, was written. Most of the terrorist activities were known and published extensively in Japan as books. However, a description from the viewpoint of chemistry is not found. In writing this book, I decided to make the book readable for the public, and hence all chemical structures and reactions were eliminated. Detailed descriptions of sarin and VX manufacturing methods were deliberately eliminated in order to avoid some undesirable persons manufacturing such deadly substances.

Because this book is not a research book, I did not include very many references.Although I read Japanese periodicals, newspapers, weekly magazines, and court indictment documents, I did not indicate exact sources extensively in order to make the book more readable to the public.

An Oriental proverb says, “One view is more superior than a hundred hearing.,> In this book I used many photographs. Most of them were taken by myself in Japan; some were given to me by my friends. Especially useful help was given by Mr. Kota Kinoshita of Nippon Television Network Corporation of Japan, who allowed me to use scenes from a documentary movie made on the sarin manufacturing site, Seventh Satyan. The Seventh Satyan was destroyed recently, and Japan Television made a documentary before the entire facility was destroyed.

Although the chemical terrorism described in this book occurred in Japan, there are no boundaries for chemical and biological terrorism, and we should be able to learn from Japan’s terrorist incidents.

We all hope that chemical and biological terrorism will be completely eliminated from the earth. Yet we should not neglect the preparation of such an event. We can better prepare for future terrorist attacks by understanding the circumstamces surrounding the very unusual terrorist attacks that occurred in Japan in 1994 and 1995.

Anthony T. Tu obtained his B.S. from National Taiwan University, M.S. from University of Notre Dame, and Ph.D.(all degrees are in chemistry) from Stanford University. He did postdoctoral biochemical research at both Stanford and Yale Universities. He was assistant professor at Utah State University for five years. He then moved to Colorado State University to become associate professor and professor in the department of biochemistry and molecular biology. Since 1998 he has been professor emeritus. During his career he published many scientific papers and books. He has given over 50 lectures in the U.S. and has lectured in over 20 countries. When Aum Shinrikyo committed nerve gas terrorism in Matsumoto City and the Tokyo subway, he helped the Japanese police link the sect definitively with the manufacture and use of the nerve gas sarin. For his contribution, he was given a medal by the Japanese police and was elected an honorary member of the Japanese Society of Forensic Toxicology, the society’s only foreign honorary member. He assisted U.S. military authorities on biological weapons during the Cold War days. He is a senior editor of ASA Journal, a special NBC journal published in the U.S., and consultant to Jane’s Information Group of U.K., which publishes many well-known military books and magazines. 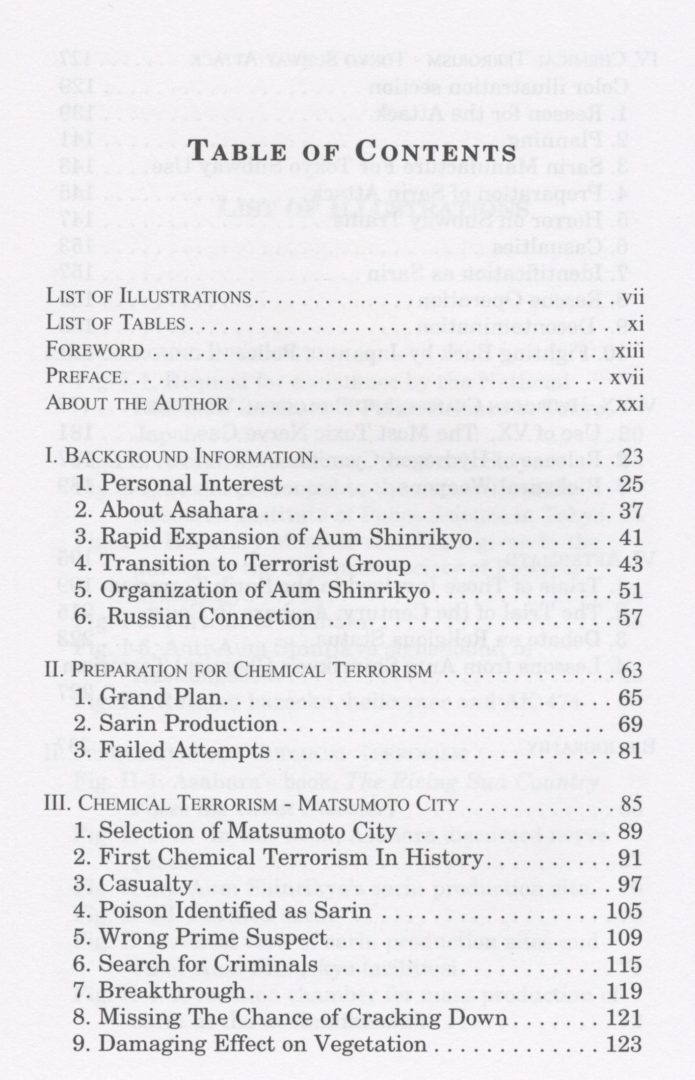 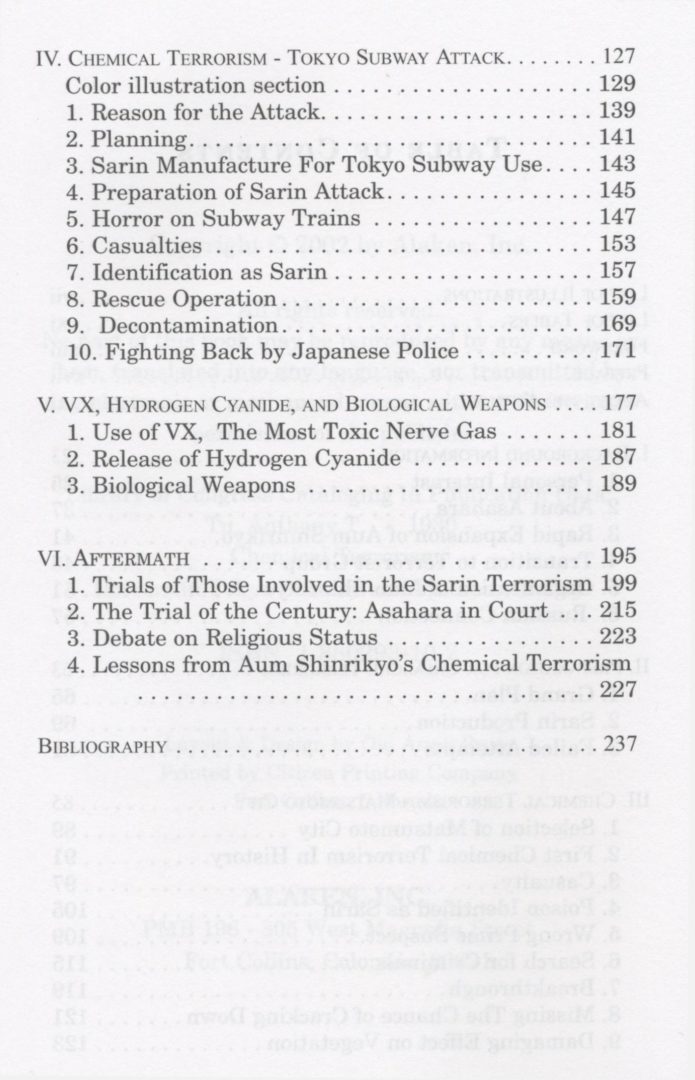