The Rationality of Christian Doctrines 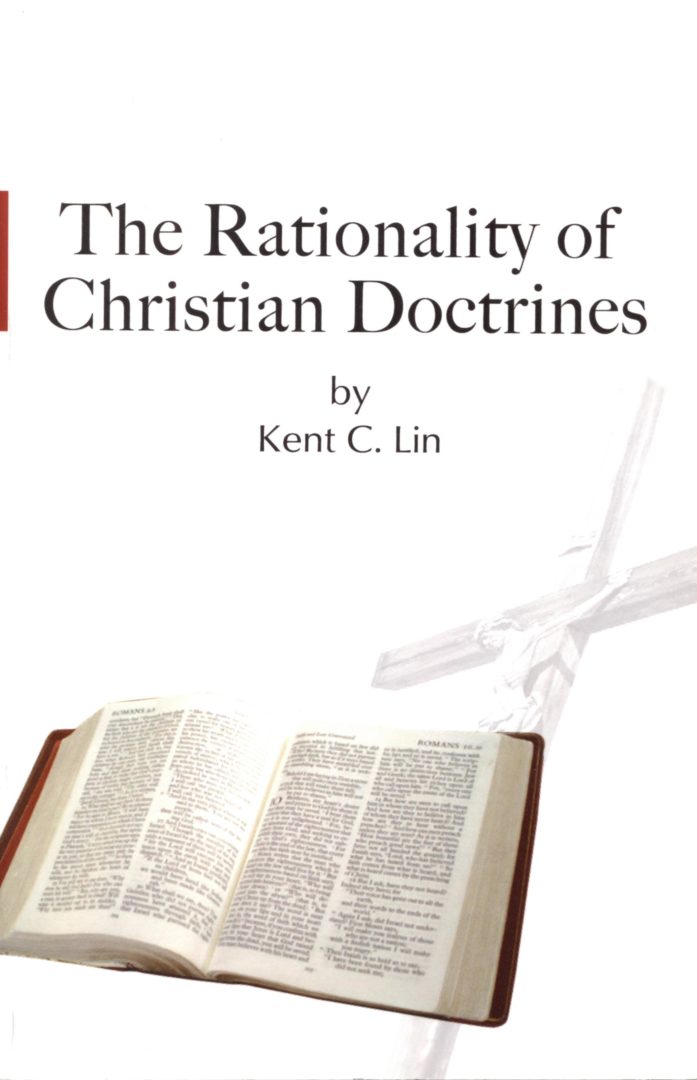 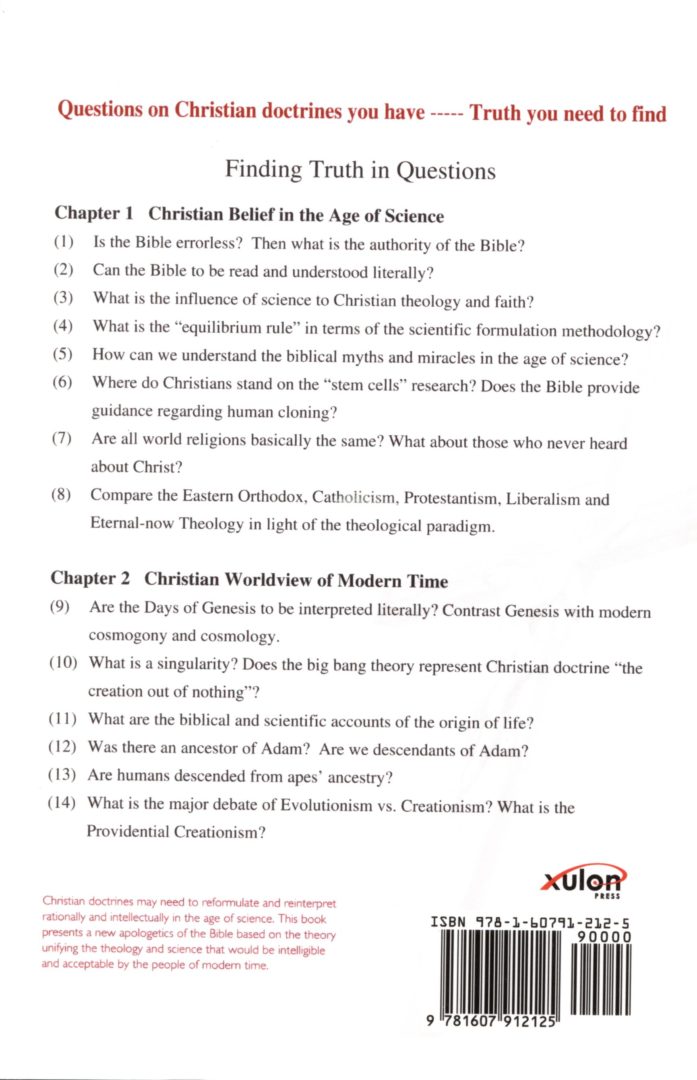 Christianity is one of greatest religions in the world. And the Bible is also the most popular and most often quoted book worldwide. Unfortunately, most of what is popularly known about the Bible stems from past ideas and interpretations, which are obscure and less than rational and intellectual. What do Christians believe in? Are Christian doctrines rational? Are our thoughts different in the present time from those in days when the Bible was written and Christian doctrines were formulated?

Christian doctrines formulated by ecumenical councils of the ancient and undivided Church were based on ancient Greek philosophy and have no foundation in theology and science. For example, even today Christians have diverse conceptions of biblical God — Trinity. The definition God-Man unity of Jesus still could not answer precisely the question of how the two natures of Christ are united. Is there any new apologetics of the Bible as a belief system of Christianity? How should we treat new challenges to Christian doctrines in the age of science?

Fundamental Christian faith is presented in the Apostles9 Creed. Of course, even today the Apostles9 Creed still has some controversy on their definition. At first glance, the idea of “God” is found in almost all religions and cultures, but of great antiquity and diversity. In Christianity the name for God may be summed up in a phrase such as “Father,” “Lord” and “Holy Spirit” that are all analogical. In fact, anthropomorphic idea of God is characteristic of biblical thought. However, Christian theology faces a difficulty in the definition of God, from which we can grasp rationally and intellectually the true insight of God.

In response to this situation, Christian doctrines may need to reformulate and reinterpret logically in our new age. As a Christian scientist, I seek to work out a new worldview based on scientific facts that would be rationally intelligible and acceptable by modern Christians.

I am oriented scientifically for Christian vindication. But I am not strong scientism with the view that science is the only paradigm of truth and rationality. 1 understand that science has its limit to offer as a rationally justified apologetics. At this point, I pursue an approach unifying scientific and theological thoughts and languages to interpret Christian doctrines based on what 1 call “eternal-now theology” from a theological point of view or “theological science” from scientific point of view. Moreover, in order to grasp the religious significance of the Bible, it is necessary to develop and apply a theological tool or language, which I call “scientific formulation methodology.”

I am not a theologian but a Christian scientist. I seek to show therefore how a scientifically oriented person approaches the task of theological inquiry in formulating the Christian doctrines. The picture of the evolutionary process of the world, for example, poses certain questions for the Christian doctrine of creation. The basic question is in turn the issue of “creationism” versus “evolutionism.” The Bible is a precious and irreplaceable claim of the existence of God, but it is not an only object of our faith. Truth may also be found outside the Bible, for instance, in the new discoveries of modern science. After all, eternal-now theology tries to develop an apologetics of the Bible to account the Christian doctrines rationally and intellectually with regard of theological and scientific issues.

Chapter 1 of this book presents an overview of Christianity including a general survey of Christian theologies and doctrines. This chapter covers the histories of the Bible, theology and science and their mutual relationships. In this chapter I introduced “eternal-now theology” as new basis of hermeneutic and “trirealism” as new worldview that is adopted to formulate Christian doctrines and establish Christian faith in the modern world.

In Chapter 2 it compares the biblical and scientific worldviews, discussing mainly about the formation of universe and the origin of life. Namely we will deal with questions of “where did the planet Earth come from?” “how did the first life come into being?” and “whether did humans evolved from a common ancestor with apes?” In this chapter, it

attempts to answer these questions by the aid of current scientific knowledge and to correlate the scientific data with the book of Genesis.

Finally, we will recognize that scientific and theological worldviews might be not mutually contradictory but beneficial. After all, we are better to treat our world as a “semi-open” or “semi-closed” system of the universe.

In Chapter 3 it discusses about the Christian experience of God and the doctrine of the “Trinity.” The biblical conception of God is always anthropomorphic. Certainly, God is not humanistic but spiritual or supernatural. Eternal-now theology attempts to explore an intellectual and faithful alternative conception of God by virtue of a scientific formulation methodology to solve a century-long debate on the ideas of God. In regard of time, we should say that “God is beyond time” or “God is outside of time” instead of “God is eternal” or “God is timeless.”

Chapter 4 presents the modern Christian view of humanity in virtue of the scientific formulation methodology. The author proposes trirealism instead of traditional dualism or monism as the view of humanity. A modern conception of the nature of humanity is neither good and nor evil. The doctrine of the original sin therefore points primarily to our spirituality rather than our morality or daily deeds.

Chapter 5 deals with Christology. The Christianity emphasizes that Jesus is the Messiah. To understand the full significance of “salvation,” this chapter offers the doctrines of Christology including “The Word became Flesh,” “God-Man unity of Jesus，” “Death of Jesus on the Cross” and “Resurrection and Ascension” interpreted technically in virtue of the scientific formulation methodology.

In Chapter 6，it applies “eternal-now eschatology” to account an eternal life for Christian ultimate. The most significance of Jesus9 teaching is what is yet to happen at the end of human history and what is our next life after death. According to eternal-now eschatology, the resurrection of the dead and the final judgment as permanent separation of the righteous and wicked for their eternal reward or punishment are explained in virtue of the scientific formulation methodology.

Chapter 7 presents the life and ethics for modern Christians in this changing world. We know that Christianity is not primarily about providing special moral rules. Nevertheless, it is concerned with morality and attempts to live a good human life with others. The fact of change in Christian thought and attitude in this generation is undeniable. As a result, it is bringing us to new moral standard and conflict between conservatism and liberalism.

Finally, I write this book both as a Christian firmly committed to rational and intellectual apologetics of the Bible and as a scientist firmly committed to empirical and objective inquiry. It is written not only for Christians but also for all occupations and non-Christian readers who are eager to know what the Bible actually states and teaches, and how Christian doctrines have its rationality in interpretation of the Gospel. It is my attempt therefore to seek a proper balance between scientific evidence and theological description of Christianity and its doctrines.

Chen-chong Lin (known as Kent C. Lin) was born in Chia-yi, Taiwan in 1927. He finished his college education (BS) in Chemical Engineering at National Taiwan University in 1951. He took his MS in Doshisha University in Japan in 1958 and took his doctorate (Dr. rer. nat.) in Technical University Munich in Germany in 1965.

After he worked as a researcher in some governmental Industrial Research Institutes, he was full time professor of Chemical Engineering and Material Science at the three Universities—National Taiwan University (1966-1981) in Taipei, Taiwan, New Jersey 丨nstitute of Technology (1982-1988) in Newark, USA and National Chiao-tung University (1988-1997) in Hsin-chu, Taiwan. He was a Research Follow of the UN Atomic Energy Agency in Tokyo, Japan (1959-1960), a Humboldt Research Fellow at Technical University in Munich, Germany (1967-1968) and a visiting professor at Louisiana State University in Baton Rouge, USA (1979-1980). He immigrated with his family to the United States in 1977. During his career in education and research he published over 180 technical papers and several college textbooks. His latest textbook is Nanotechnology: basic and practice (2005).

He became an Eminent Fellow (FABI) of the American Biological Institute, Inc. in 1994 and received the International Cultural Diploma of Honor as Magnificent & Distinguished (MD) in 1995 and Presidential Seal of Honor in 1996. He has become an Honorary Member of the International Biographical Association (Cambridge, England) as a Life Fellow (LFIBA) in 1995, and has been appointed as a Deputy Director General (DDG) in 1996.

Since his retirement from his teaching and research career in 1997, he began to write on the subject of religious philosophy. As the product of these international relations and cultures, his understanding of Christianity is rational and intellectual. He is the author of books: Abundant Life (1989), Science and Religion (2000), Modern Philosophy of Human Life (2002), Modern Interpretation of the Bible (2005), 80-Yearfs Recollections of Chenchong Lin (2007) and The Rationality of Christian Doctrines (2009). 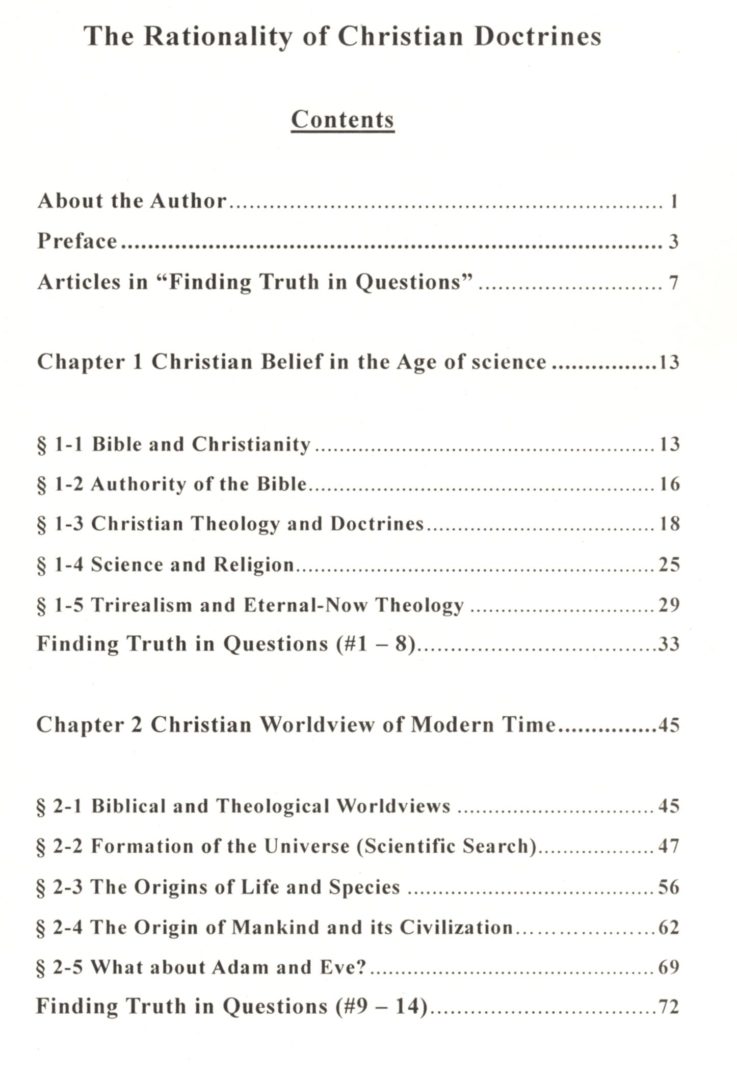 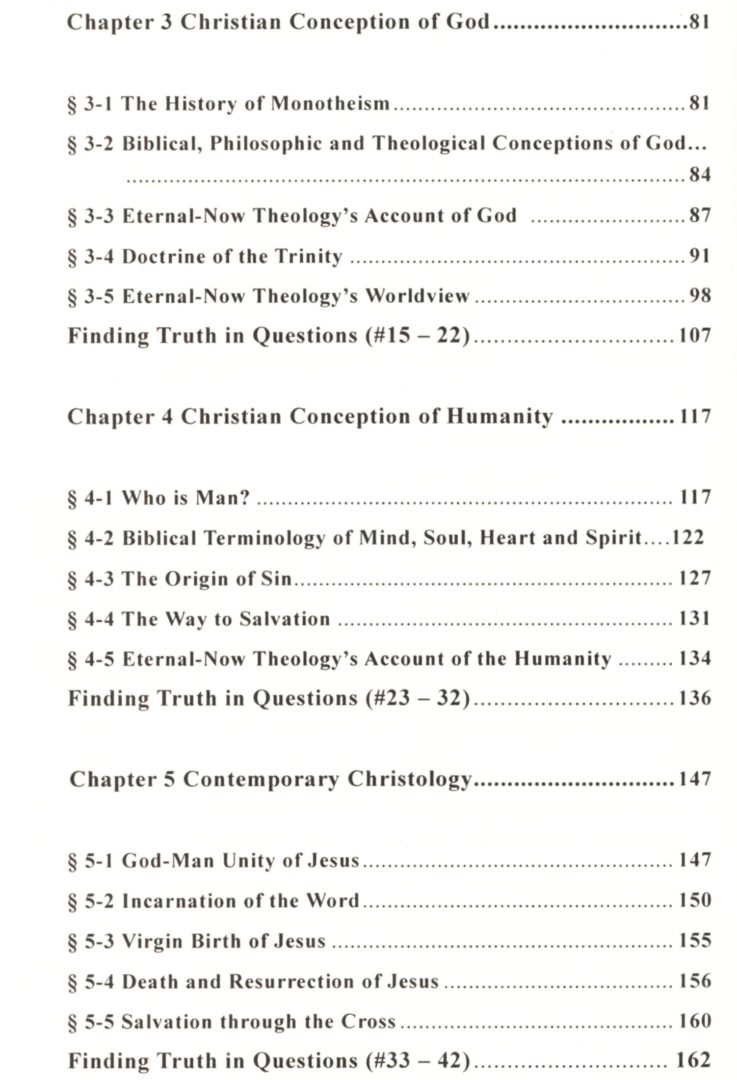 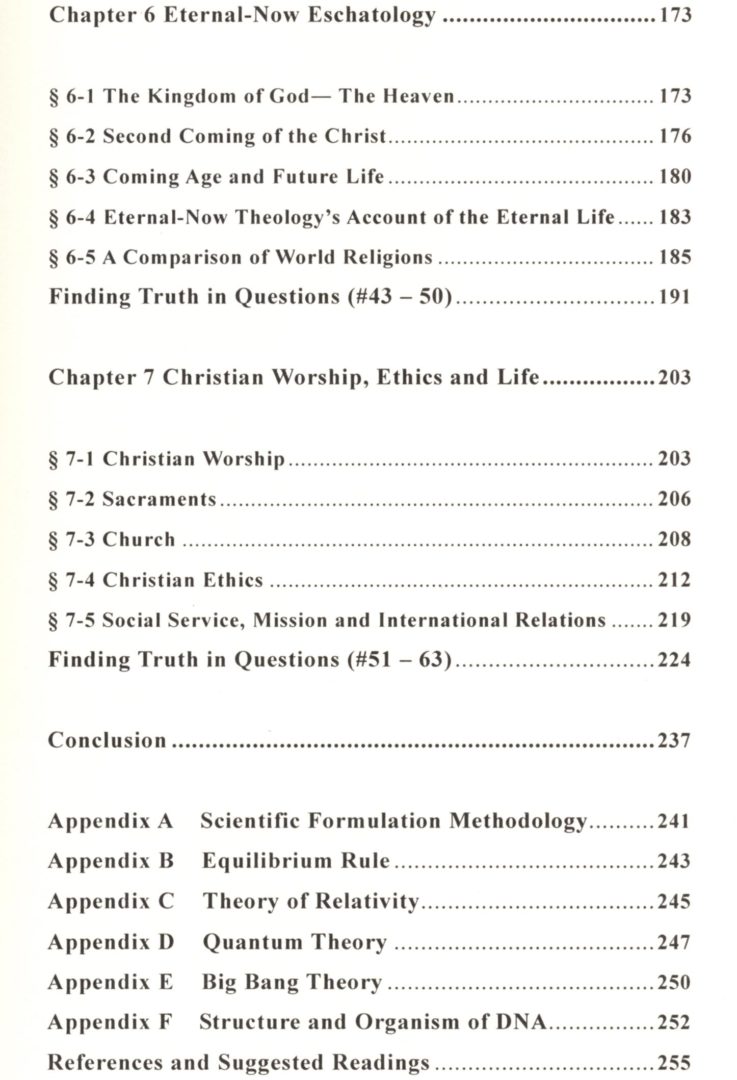