The retired inventor of N95 masks is back at work, mostly for free, to fight covid-19

When the novel coronavirus began gripping the globe in March, Tsai was summoned from his short-lived retirement. He was in urgent demand because he is the inventor who, in 1995, patented the filtration material used in disposable N95 respirators.

The coveted masks are in short supply and are desperately needed by health-care workers and others who require protection from the highly contagious coronavirus.

Tsai started receiving a ceaseless torrent of calls and queries from national labs, companies and health-care workers in need of help.

“Everyone was asking me about the respirators,” said Tsai, 68, who is originally from Taiwan and now lives in Knoxville, Tenn.

Mainly, people wanted to know how to scale up production in the wake of a mass shortage and how to sterilize the masks for reuse.

N95 masks have become a critical commodity as the pandemic has fueled a global scarcity of the virus-blocking equipment. Unlike other forms of personal protective equipment, including homemade masks and cloth covers, N95 masks actually filter out contaminants, making them the most protective masks on the market.

Tsai immediately hit the drawing board. He set up a makeshift laboratory in his home, where he lives with his wife and daughter, and began experimenting with different methods to decontaminate the masks.

“I started working almost 20 hours a day,” he said, adding he’s doing it mostly on a volunteer basis. “But I didn’t mind.” 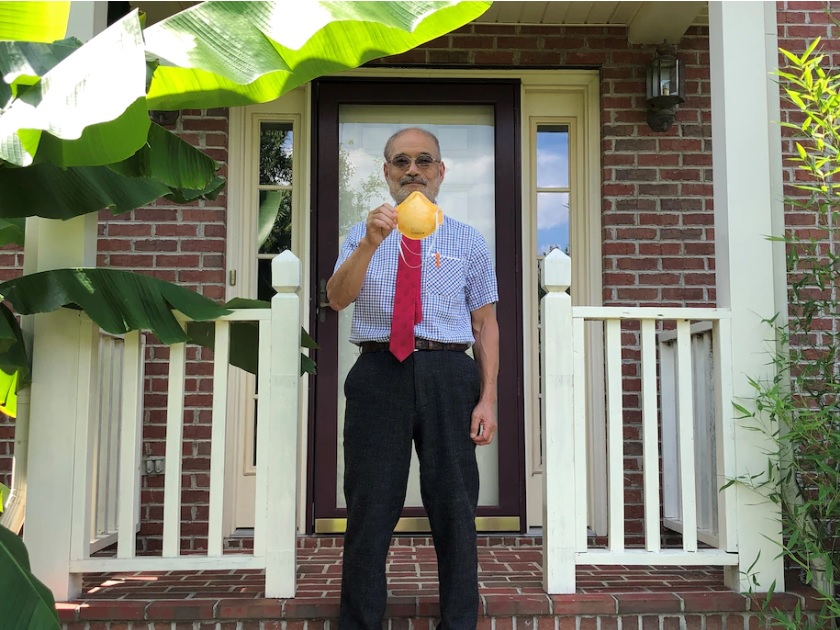 He tried everything he could think of to cheaply sterilize the masks without losing filtration efficacy: He boiled them, steamed them, baked them in the oven and even left them out in the sunlight for extended periods of time. Then he ran tests

After trying multiple approaches in his home, he published an emergency medical report, which proposed a variety of methods for cleaning and reusing N95 masks without compromising the electrostatic charge required for the filtration system to function.

His central finding was that N95 masks can be heated at 158 degrees Fahrenheit for 60 minutes using a dry heat method without diminishing the filtration technology, and his hypothesis was validated by the National Institutes of Health.

After the first report was published in April, he continued to experiment, eagerly sharing his findings with the scientific community and anyone who asked.

He’s spread the word about the optimal material to use for homemade masks. His suggestion: nonwoven fabrics, such as car shop towels.

On Facebook, she denounced a Starbucks worker who asked her to wear a mask. It backfired.

Among the many companies and research groups that reached out to Tsai was N95DECON — a collaborative group of volunteer scientists, engineers and clinicians from around the country focused on N95 decontamination and reuse. They sought Tsai’s unique expertise.

Oak Ridge National Lab, a Tennessee-based laboratory sponsored by the U.S. Energy Department, got in touch, too. The team at Oak Ridge was searching for ways to scale production of N95 masks.

“Dr. Tsai was immediately willing to collaborate with us on our lab-wide covid-19 effort,” said Merlin Theodore, the director of the Carbon Fiber Technology Facility at the lab. Soon after the team reached out to Tsai, “he showed up at the lab ready to get to work,” she said.

The goal was to convert the lab’s carbon-fiber-processing facility into a filtration-cloth facility to produce the filter technology needed for N95 masks. The conversion process proved complicated, but with Tsai’s help, “we quickly got the system up and running,” said Lonnie Love, a lead scientist at Oak Ridge.

“He came in and described exactly what was needed to build his charging system and scale it,” he said. “Tsai has been really critical for us to solve this problem fast.”

Theodore agreed. “Dr. Tsai shaved off several months to a year of time for us,” she said, confirming that Oak Ridge Lab reached its target in only a few weeks.

The facility is now able to produce material for 9,000 masks an hour, and Oak Ridge is working closely with industry partners to teach them how to make Tsai’s filtration material for widespread distribution.

While Oak Ridge does provide the filter material to other labs to study, it does not sell the product directly for widespread distribution. Rather, the team teaches industry partners how to scale production.

For instance, Cummins, a corporation that manufactures engines and filtration products, started exploring how to use its fuel-filtration technology to support health-care facilities. The company wanted to pivot from manufacturing air, fuel and lube filtration products mostly for car parts to supply the filter media used in respirators instead.

“Dr. Peter Tsai is indeed a very esteemed researcher in the field of nonwovens,” said Chis Holm, the director of filter media technology & IP at Cummins Filtration. Tsai’s guidance, he said, has been essential to the corporation’s coronavirus efforts.

“If I can have this opportunity to help the community, then it will be a good memory for the rest of my life,” Tsai said. “I’m happy to do it.”

A teacher barely knew her student’s parents. But she took in their newborn while they had covid-19.

Tsai came to the United States in 1981 to pursue his doctoral degree in a variety of subjects at Kansas State University, where he completed more than 500 credits, despite needing only 90 to graduate. His thirsty intellect drove him to take courses in subjects ranging from chemical engineering to physics and math.

His breakthrough on the mask came when he was leading a research team at the University of Tennessee in 1992. The team’s goal was to develop an electrostatic charging technology — coincidentally called corona charging — to filter out unwanted particles. His invention eventually became the foundation of the N95 respiratory mask.

Over the course of his career in textile manufacturing, engineering and teaching at the University of Tennessee, Tsai has earned 12 U.S. patents in filtration technology, including his latest hydrostatic charging method, which makes respiratory masks twice as efficient as his initial invention.

Beyond lending his expertise to others, Tsai’s colleagues say he’s a pleasure to work with.

“I’m taking this opportunity to soak up all the knowledge I can get,” Oak Ridge’s Theodore said. “And he’s not hesitant to share it, which is what I adore most about him.”
According to Theodore, Tsai never fails to answer her calls, no matter the hour. “We have conversations late at night and practically any time, she said. “He always makes himself available.”

“That’s what struck me the most about him,” Theodore said. “He didn’t care about the money. He just wanted to help as many people as he could.”

“He’s very humble and unassuming despite being a pioneer in this area of filtration,” Love said. “Just when he’s ready to relax, all hell breaks loose, and he’s become critical.”

Tsai, however, said that it’s the health-care workers who are “the real heroes” and that he’s just doing his job.

Although Tsai technically retired in 2018, “he never stopped working and thinking of ways to improve his technology,” said Maha Krishnamurthy, the vice president of the University of Tennessee Research Foundation.

“He couldn’t actually quit,” she said. “It’s a quality of all great researchers — you can never shut your brain off.”
Source from The Washington Post
Posted in 07/2020