Our goal is to provide children with a complete musical education, and to offer them a childhood full of music and happiness. We strongly believe the training and activities we provide can foster harmony and balance in personality, and build a sense of honor and responsibility, discipline, self-confidence and teamwork. Our sister ensemble, Taipei GloryStarChorus, has been one of the most prestigious children’s choral group in the world over the past 40 years. Continuing their tradition, we hope to achieve a similar level of musical excellence and community involvement here in Los Angeles.

The Los Angeles GloryStar Children’s Chorus was founded by Professor Chuan-Shien Lu and Hsin-Hsin Yen Lee in 1995 in Southern California, with the aspiration of extending all the benefits of the GloryStar tradition to overseas children.
Our repertoire includes modern music, musicals, with an emphasis on classical and folk music presented in the original language. For the past 14 years the chous has seen tremendous progress, receiving praise and invitations to give performances at locations including Lincoln Center, the Walt Disney Concert Hall, Harvard University, Rockefeller Center, and the Taiwan National Normal University Music Department. 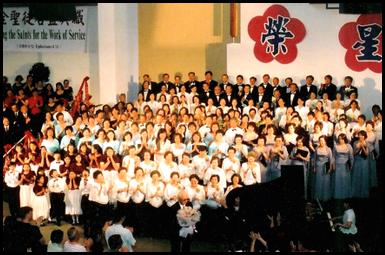