I joined seven gentlemen in publishing a book of individual autobiography at the end of 2016.  I thought I had described all of the highlights of my life up-to-date.  Since I was getting old and my health was declining, there wouldn’t be anything exciting or worth mentioning from then on. However,  life does not stop with the ending of a partial autobiography.  My life after 2017, my 80th year, started another waves of highlights.

I have always been shy and awkward in public.  I never was a leader, even when I was the top of the class in my school work, I was never elected as the class leader.  Even though I was chief psychologist at Lehigh Valley Guidance Clinic in PA and two universities in Taiwan, I was the only person on the job, no one was under my command.  Therefore, I never dreamed that I could be a leader, better yet, the president of any big organization.

In 2016, I was invited by Dr. Dan Ko to be a board member of TASS, Taiwanese American Senior Society to be the Program Director. After carrying out that job for two years, I was elected as president of TASS, (membership of over 100) in 2018. Subsequently, I was elected the President of East Bay Taiwanese Association EBTA (200+members) in 2019.  It was amazing and surprising to me that I was able to become the president of two big organizations, especially after I was 80 years old.  It was certainly beyond my dream and my expectations.

I accepted being the President not because it would give me fame or prestige,   but because of the necessity of the situation at the time.   Though I was apprehensive of my ability to handle the job, I also realized that it might be the last chance for me to do something different in my lifetime.  It was a dilemma, and I chose to accept.

What I learned in these years were experiences that were very enriching.

I used to be just a follower, doing whatever the group leaders decided, never having had much to say.  For the first time in my life, I was able to actively involve and participate in planning and decision making of group affairs and activities.  It was very rewarding to put my ideas and thoughts into effect and have them realized.

We met every Tuesday almost all year round.  So, there were endless programs to plan and speakers to recruit, and then to write up the content of the programs to distribute to the members every month.  Organizing multiple activities kept me very busy. Our members are mostly retired professionals, who had specialized in various fields.  Our topics of speeches varied from medicine, science, computers, smart phones, 5G network, finance, music, psychology, photography, archeology, and so on.

As the Program Director, followed by becoming the President, I learned to coordinate and negotiate in various situations. I tried to solve the problems smoothly in a democratic way, while not to lose my own stands.  I had to learn to insist on what I thought was right by stating my reasons to persuade others. For me to do so, I had to be alert constantly and hold good judgments, because I had to be responsible for the consequences.   During last two years as President, I had several occasions when I needed to change the decisions according to my judgment.  Fortunately, these situations and events turned out very well for all involved. It gave me confidence and sense of fulfillment.

As a person in charge of the group activities and programs, I felt obligated to participate in every session of the programs and speeches, never failed to attend unless I had to be away. I always arrived early and made the initial introductions or reports at the beginning of the meetings.  It greatly helped me overcome my stage fright.  I was always alert while listening to the speeches, never dosing off or falling asleep.  Therefore, I learned a lot from various speeches and lectures.  I also found out that although sometimes the topic might seem boring or beyond my comprehension,  if I listened diligently, it was interesting and understandable.  So, I enjoyed attending every session and participated in every activity.

If I were not the person in charge, I might have gotten lazy and found excuses not to attend, sometimes, and I would have ended up gaining nothing by staying home.

The beneficial part of being the President was, not only the opportunity to make decisions and put my ideas and thoughts into reality, but also the opportunity to invite special speakers or performers to come. To mention just a few: I was very happy to have invited Nobel Prize Laureate Dr. Yuen Che Lee 李遠哲 in 2017.   Dr. Lee and his wife Jean were of the same class year with me at Taiwan University.  We are old acquaintances. So, I was very happy to see them again.  I also invited a Taiwanese composer, Mr. M. C. Wang 王明哲 in 2018 to perform and sing his own songs.  I suggested we invite a famous retired Stanford professor in cardiology, Dr. Jue C. Sung 宋瑞珍醫師to speak to us in 2019.

Organizing big activities and events was another challenge I had never had to perform or take charge of before. While as president of EBTA in 2019, I was responsible for three big events:

Each activity was different and so was each a great challenge.  Fortunately, we had very good team of 7 board members.  From the initial planning and assigning tasks to finally carrying out our work, we cooperated well.   Firstly, we had to decide the date, then arrange the setting and content of the activities: for example, we had to figure out how to provide food for such an enormous crowd, set up the place, arrange the entertainment programs, and try to make these events interesting and enjoyable.  After meetings and meetings of discussions, we came up with detailed task assignments for each of the board members.   Though we had met some difficulties and problems, they were all solved.  At the end, everything turned out well and enjoyable.

One more episode or high light of the year was my being the captain leading EBTA table tennis team to attend the Bay Area Ping Pong Tournament on June 8 in San Leandro. First, they let me play as a Show with CEO of Taipei Cultural Economic Center from SF 馬鐘麟先生, because I was honored as the oldest player in the tournament.  I could see that he must have played well before, because he had good moves , but he lost the game due to lack of practice or maybe he just tried to let me win.  I won two prizes: the second place in women’s single 女子單打and for being a good sport.  They said I showed courage to attend the tournament at my age. 最佳精神獎.  It was a fun day.

I was particularly happy with the last activity, the EBTA annual meeting and entertainment on Dec. 14.  It was a big event.  The meeting started with lunch for 200 people, then a ceremony of transferences of new and old board members and presidents.  After the ceremony, the entertainment started.   To my surprise, the procedure of the ceremony was not easily set up because we all had diversified opinions among board members.   I had to deal with these issues before the final decision was made.

But for the entertaining programs, I made the plan almost all by myself.  I wanted it to be different from previous years and also to reflect my preference.  It was not an easy job but it was worthwhile and gratifying.

Two of the five entertaining programs were initiated by me and I arranged every step. The rest of the programs were suggested by members of the board and I extended the invitations and proceeded to make it happen.

The first entertaining program I planed was to have a choir sing a song composed by Mr. Wang王明哲 whom I invited to perform for TASS in 2018.   His songs are mostly about Taiwan.  I particularly like his choral song called “Glorious Sun.” 榮耀的日光.  It was on the YouTube sung by National Taiwan University Choir.   The lyric of the song praises Taiwan as a beautiful island:

“There is a beautiful island in the Pacific whose name is called Taiwan…!”

The song goes on to describe the people and the land.  I thought it was the perfect song for the occasion.  I had gone a long way to obtain the music while in Taiwan in May, 2019.  I contacted Mr. Wang first, and then purchased the choral music in Taipei. I had registered our church choir to sing his work.  Thanks to our church choir conductor Catherine, who accepted my proposal, and led us to practice from September to November.  We sang at the church on Thanksgiving Day and then for EBTA Annual meeting.  We were excited to sing the song and it received big applause.

The other program I initiated was inviting a professional violinist, Mr. Elbert Tsai to play a violin solo. I had to invite him very early in the year because he was very busy.   He is the son of one of our EBTA members.  The performance was fantastic.  I was so moved that I stood up to lead the standing ovation.

We were also very happy to invite a solo vocalist from Chicago, Dr. Chen 陳幸世醫師.  He is a MD but loved singing so much that he was well trained in singing.  His performance was excellent as well.  The other two programs were also very special and good. The performers were our own EBTA members, and so were well known to the audience.

So, the last day and the last mission of my term as the President ended with great success. I felt delighted and elated.

While I was busy with public services, I was also blessed to have a big loving family including three generations (22 altogether).  We have family reunions twice a year, once during Christmas and New Year season; the other one is in the summer when schools are out. What impressed me and made me very proud was the fact that all the children and grandchildren not only get along well, but they really enjoyed being together and cared for one another. They cheered when there were good news and concerned when there were problems.  We used to communicate via emails and lately with text messages.

I formed a text message group and named it “Big family” to be easier to post whatever comes to our minds.  Almost everyone responded to occasions like birthdays, special days, graduations, whoever gets an award or just daily greetings with information, pictures, etc. Our communications have become very lively and frequent since March when we all had to practice Shelter in Place and the schools were out.  Even 10 year old Mei and 8 year old Hazael joined the conversations. One day, the name of the group was changed to “My Big Fat Taiwanese Family.”  Guess who did it?  To our surprise, it was the youngest one in the group, 8 year old Hazael who had made the change.

Life can be amazing if you let it lead you and accept whatever comes your way.  I appreciate where fate led me.  Thank God for it. 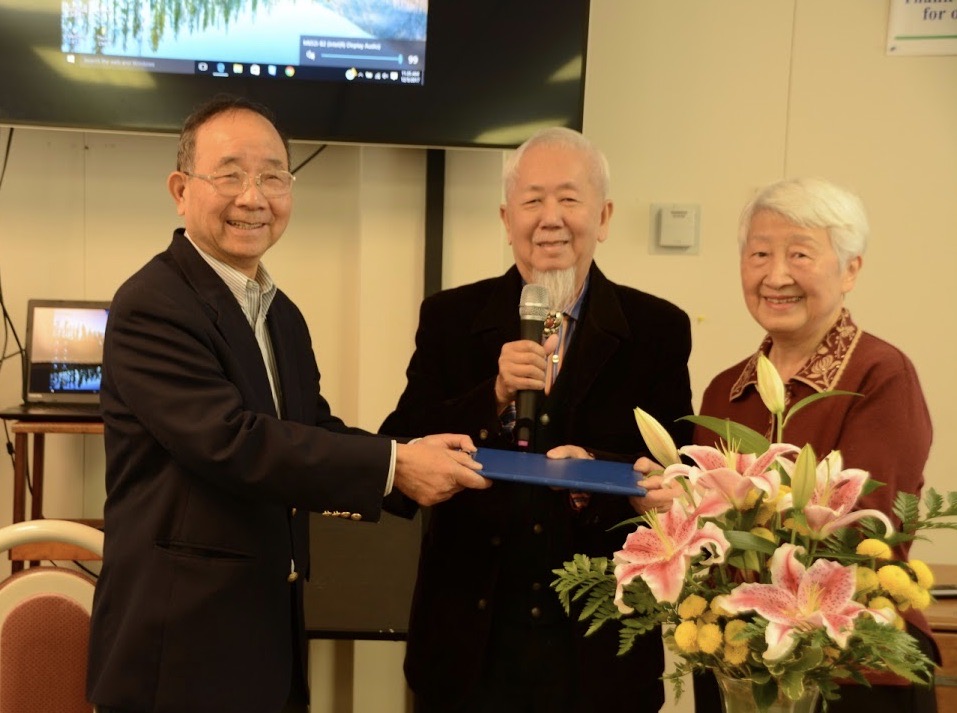 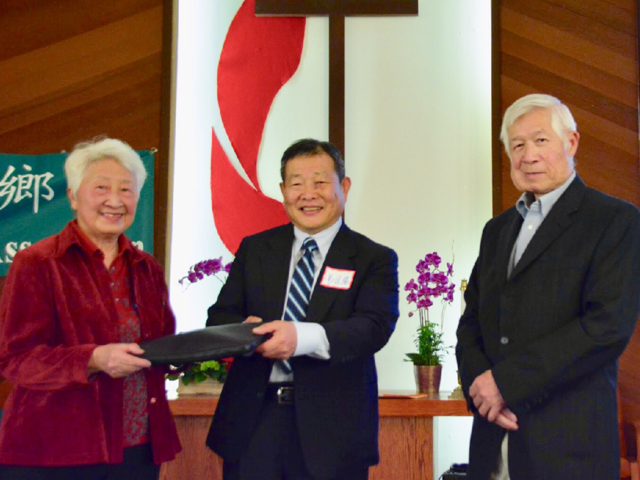 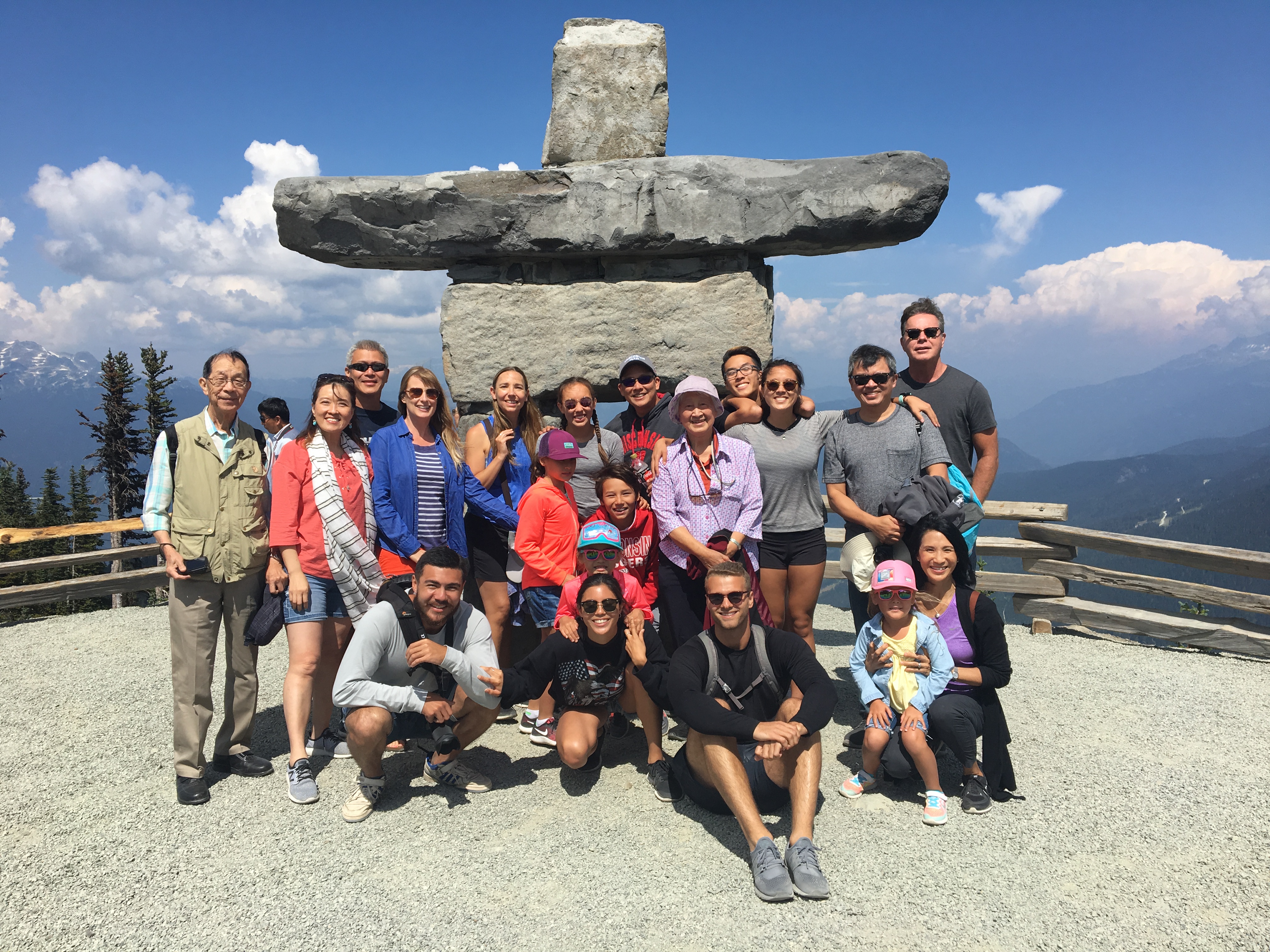