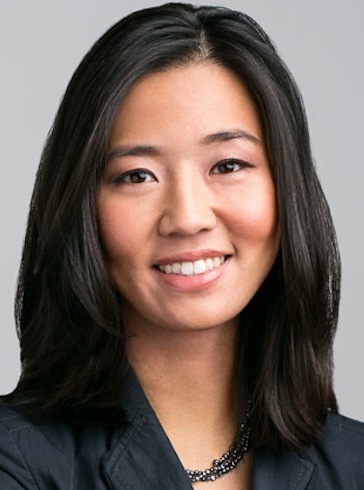 Michelle Wu (吳彌 Wu Mi) was born in 1985 in Chicago, Illinois to Taiwanese immigrant parents. She graduated from high school in 2003 as a valedictorian and an Illinois U.S. Presidential Scholar. After high school she attended Harvard University, earning her bachelor’s degree in 2007. She later also earned her J.D. from Harvard Law School in 2012. After completing her bachelor’s Wu consulted in Boston’s financial district, later entering public service by working in the Boston Mayor’s office.

Wu has been listed among six finalists named “Rising Stars” by EMILY’s List, listed number 31 on Boston magazine’s “The 100 Most Influential People in Boston,” and on Marie Claire’s 2016 list of “The 50 Most Influential Women in America.” She also received the 2016 Ten Outstanding Young Leaders Award from the Great Boston Chamber of Commerce and the 2017 Eleanor Roosevelt Award from the Massachusetts Democratic Party. In 2019, T.A. Archives selected her as an Outstanding Taiwanese American.